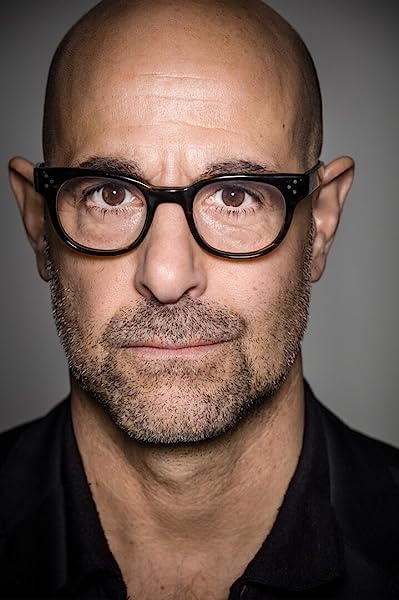 The Tucci Table by Stanley Tucci: Cooking with Family and Friends Hardcover – 2 April 2015

by Stanley Tucci (Author), Felicity Blunt (Author)
4.5 out of 5 stars 1,754 ratings
See all formats and editions
Sorry, there was a problem loading this page. Try again.
Note: This item is eligible for FREE Click and Collect without a minimum order subject to availability. Details
Pick up your parcel at a time and place that suits you subject to availability. How to order to an Amazon Pickup Location? Learn more

Food can bind and govern a family and no one knows this more than Hollywood actor and respected foodie, Stanley Tucci. Throughout his childhood, cooking was a familial venture evoking a wealth of memories and traditions.

Featuring family-friendly dishes and stunning photography THE TUCCI TABLE will captivate food lovers' imaginations with recipes from Stanley's traditional Italian roots as well as those of his British wife, Felicity Blunt. Each dish is introduced by Stanley and he offers an insight into why each recipe is so special to his family. Recipes include Pasta Al Forno, Roasted Sea bass, Pan Seared Venison and British classics such as Shepherd's Pie and Sausage Rolls.

THE TUCCI TABLE captures the true joys of family cooking.

Some cookbooks are visually inspiring but don't deliver on the recipe front and are cool in tone; others are like a glimpse into someone's life - warm and inviting, with recipes that make you want to join the family party. The new book by American actor Stanley Tucci (of Devil Wears Prada, Hunger Games and, more recently, TV series Fortitude fame) and his wife Felicity Blunt falls into the latter category. It makes you want to draw up a chair at their kitchen table, be part of their family, dive in and eat the food. -- Karen Barnes ― Delicious

The Tucci Table is not a book of fashionable recipes but a collection of dishes to cook for family and friends - a love letter to his Italian culinary heritage, his wife's classic English cooking, and all the people who matter most in their lives. -- Shane Watson ― The Times

Tucci is a foodie who loves a culinary get-together, and offers up warmly annotated, user-friendly recipes that reflect his Italian-American background and that of his (British) second wife Felicity Blunt. ― Metro

A beautifully produced collection of wholesome and hearty Italian recipes that will bring the whole family together.

Stanley Tucci is an EMMY and GOLDEN GLOBE-winning actor. Since his career began nearly 30 years ago he has appeared in more than 50 films including THE LOVELY BONES and THE DEVIL WEARS PRADA, and has been a regular fixture on Broadway. He has directed and produced films, most notably BIG NIGHT in 1996. He currently presents US TV programme VINE TALK where he invites celebrities to engage in compelling conversations about wine. Find out more about VINE TALK at: http://www.vinetalk.com

Felicity Blunt is a British literary agent. She is on the board for the WOMEN'S PRIZE FOR FICTION and married Stanley in 2012. Her Twitter handle is @felicityblunt

Read more
Start reading The Tucci Table: Cooking with Family and Friends on your Kindle in under a minute.

ALEX L
2.0 out of 5 stars CULDNT RECOMMEND THIS.
Reviewed in the United Kingdom on 30 November 2021
Verified Purchase
MY PARTNER LOVES STANLEY TUCCI, SO I GOT HER A COUPLE OF HIS COOKBOOKS.

UNFORTUNATELY SHE FELT THE STORIES IN THE BOOK WERE FAIRLY BORING AND POINTLESS ...........
AND THE RECIPES RATHER BLAND, NOT VERY GOOD.

Maria
5.0 out of 5 stars The Tucci Table
Reviewed in the United Kingdom on 15 May 2021
Verified Purchase
Superb, master piece… love this book so very much. I wouldn’t of expected anything less from such an amazing and smart guy. HIGHLY recommended!!
Read more
6 people found this helpful
Helpful
Report abuse

Orsolya Gyorfi
5.0 out of 5 stars Must have
Reviewed in the United Kingdom on 23 April 2020
Verified Purchase
My other half has been cooking from this on and off since i got it for him and there's some really good recipes in it.. Oxtail soup he made using recipe from this is phenomenal! Do recommend~
Read more
6 people found this helpful
Helpful
Report abuse

mr ian r cross
2.0 out of 5 stars Disappointed
Reviewed in the United Kingdom on 12 March 2022
Verified Purchase
Very poor as far as cookbooks go. I was so looking forward to some fantastic Italian family recipes but ended up with a very poor cookbook. Love Stanley Tucci, but not his cookbook. This is one for the back of the cupboard where it will stay.
Read more
Helpful
Report abuse

CJH1964
5.0 out of 5 stars Love it
Reviewed in the United Kingdom on 15 April 2021
Verified Purchase
Great book love it
Read more
One person found this helpful
Helpful
Report abuse

Elaine
5.0 out of 5 stars Food and conversation
Reviewed in the United Kingdom on 31 December 2021
Verified Purchase
I love Stanley Tucci and this book encapsulates up his love of food with easy to follow recipes and a warm storytelling theme
Read more
Helpful
Report abuse
See all reviews