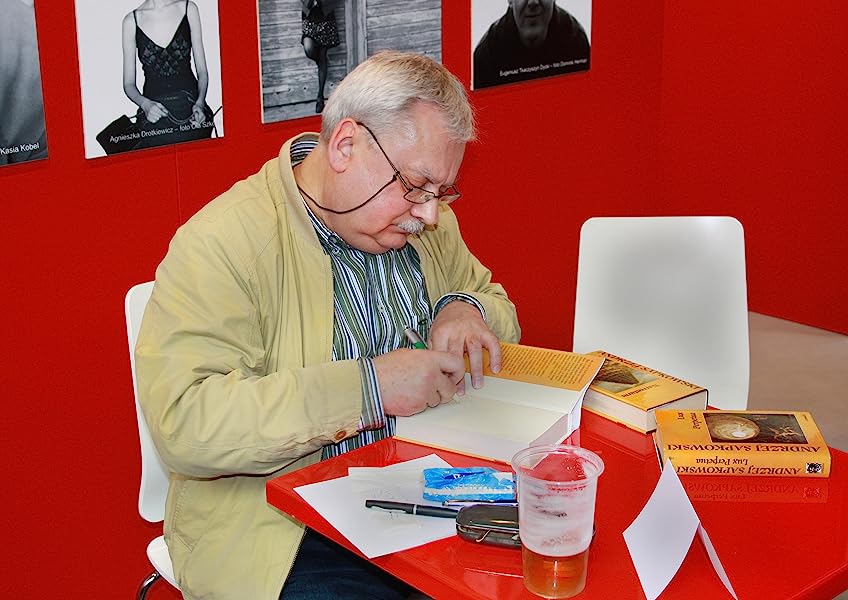 by Andrzej Sapkowski (Author), Peter Kenny (Narrator), David a French (Translator) & 0 more
4.3 out of 5 stars 472 ratings
Book 1 of 3: Hussite Trilogy
See all formats and editions
Sorry, there was a problem loading this page. Try again.

From the New York Times bestselling author of the legendary Witcher series--the books that inspired the Netflix show and the hit video games--comes the first in an epic new trilogy.

Reinmar of Bielawa, sometimes known as Reynevan, is a doctor, a magician and, according to some, a charlatan. And when a thoughtless indiscretion finds him caught in the crosshairs of powerful noble family, he is forced to flee his home.

But once he passes beyond the city borders, he finds that there are dangers ahead as well as behind. Strange mystical forces are gathering in the shadows. And pursued not only by the affronted Stercza brothers, bent on vengeance, but also by the Holy Inquisition, Reynevan finds himself in the Narrenturm, the Tower of Fools.

The Tower is an asylum for the mad, or for those who dare to think differently and challenge the prevailing order. And escaping the Tower, avoiding the conflict around him, and keeping his own sanity might prove a greater challenge than Reynevan ever imagined.

The Time of Contempt

The Tower of Swallows

Lady of the Lake

The Malady and Other Stories: An Andrzej Sapkowski Sampler (e-only)

Page 1 of 1 Start overPage 1 of 1
Previous page
Next page
Tell the Publisher!
I’d like to read this book on Kindle

What other items do customers buy after viewing this item?

Andrzej Sapkowski (Polish pronunciation: [ˈandʐɛj sapˈkɔfskʲi]; born 21 June 1948) is a Polish fantasy writer and former economist. He is best known for his best-selling book series The Witcher. In 2012 Sapkowski was awarded the Medal for Merit to Culture – Gloria Artis.

Amazon Customer
2.0 out of 5 stars There’s such thing as too much information
Reviewed in the United Kingdom on 27 October 2020
Tower of Fools by Andrzej Sapkowski is the first in a new series from the awesome author of The Witcher!TOF is a marvel in its own right; there’s a heavy, heeeeeavy medieval genius to this - but unfortunately this was a weight I could not carry.I was super excited to read this new series by the author of one of my most favourite franchises, but Tower of Fools, to put it simply, is not The Witcher. It wasn’t just the author that drew me into this one, it was also the words ‘mental asylum’ I mean who isn’t drawn in by that? However, I never made it far enough to get to the asylum.From the get go I was totally lost and the main character, Reinmar of Bielawa, was someone I really didn’t care enough about to find my way.I will say, like most of Sapkowski’s writing, the environments are so vivid and real, there’s definitely a thick, grounded foundation in the writing that keeps the buildings straight up - but that’s not always enough when the story is....squiggly.Perhaps it’s just me but there was too many names, roles, families, histories all to take in on the FIRST PAGE, it threw me off and so kept me unattached to the point where I perceived what I read as too much or not enough and so I couldn’t commit!Genius, inventive writing but too many mechanics of a book rather than just a story!I feel bad rating since I DNF-ed it so on here I’m not going to!A huge thank you to @netgalley & @orionbooks for giving me an arc of this for review! I was super happy to try it before its release!
Images in this review

Sheila Kennedy
5.0 out of 5 stars A stunning read!
Reviewed in the United Kingdom on 1 November 2020
Verified Purchase
I so loved this book; I was heartbroken to finish it. A glorious evocation of fifteenth century Europe, like the Canterbury Tales or the Pilgrim's Progress, or perhaps Hesse's Journey to the East; the characters are full of life, and I didn't want to leave them!
In the midst of tragedy and war, there's humour too, and I can't wait to see what the future holds for Reynevan, Scharley and Samson in the next volume!
Five stars!!!!!!!!

L. Young
2.0 out of 5 stars I really wanted to enjoy this but..
Reviewed in the United Kingdom on 10 February 2022
Verified Purchase
I really wanted to enjoy this but sadly for me it failed to deliver. I was intrigued by the Hussite Wars as a backdrop having little to no knowledge of them but I needed to keep Wikipedia open just to understand what was happening and where we were. The mash up of historic fiction and fantasy wasn't for me, nor the episodic nature of the novel, and I found the main character to be irritating in the extreme. A no from me.
Read more
One person found this helpful
Helpful
Report abuse

Ysabeaux
2.0 out of 5 stars Learn some history and geography before you start
Reviewed in the United Kingdom on 19 June 2021
Verified Purchase
Loved The Witcher pc game. Not so much the tv series. And not so much this book, in fact I will be very glad to have finished it! I don’t really care what happens, too many coincidences, ‘hero’ is too stupid. I have probably suffered from not knowing the history of the setting, and not knowing how to pronounce the names of people and places, so I expect I am suffering from some ‘lost in translation’ moments. Not for me.
Read more
3 people found this helpful
Helpful
Report abuse

Skidmore
5.0 out of 5 stars Turn to this Novel when you get Christmas Over load.
Reviewed in the United Kingdom on 21 December 2020
Verified Purchase
Have only just started this book and so far I can't put it down The characters are so real. The plot is complex. The Storyline is one that makes you turn over the page to find out what happens.
Read more
3 people found this helpful
Helpful
Report abuse

surfingus
5.0 out of 5 stars Another classic from this great writer.
Reviewed in the United Kingdom on 14 January 2021
Verified Purchase
Not part of the Witcher series. This story is based in medieval Europe.
There are supernatural elements.
Well written and enjoyable.
Read more
One person found this helpful
Helpful
Report abuse

Xerxes Mankum
5.0 out of 5 stars This is amazing
Reviewed in the United Kingdom on 28 October 2020
This novel is basically about a young man consistently getting involved in escapade after escapade. And then, becoming involved in the Hussite Wars which will change Eastern European history forever. Reynevan is stupid, he’s an idiot, a man that’s addicted to love. But he’s young. Men around his age are always like that. When he can’t see the big picture, he’s thankfully assisted by very many helpful characters along the way, but when you’re young, you don’t have a broad picture of the world as you would wish. Some clever, intelligent men around your age will. Reynevan isn’t that.

This novel is full of Christian lore and the complexities of the Hussite Wars that occurred during this time. There’s many competing factions: The Duchies of Silesia and Bohemia, the Holy Roman Empire, the Teutonic Knights who are still licking their wounds after the Polish-Lithuanian army defeated them at the battle of Tannenberg in 1415. Mind you, that battle was more about the expansion of Teutonic influence in Poland than anything else. You will have seen witches, magical creatures and so much more in this novel. I am glad that Andrzej added the fantasy elements which I’ve always seen in medieval manuscripts. It really brings the world alive.

But then, there’s also the fact I discovered: The Hussites have been declared heretics by the Church in Rome. For those familiar with European medieval history, the Church in Rome decreed many movements that were ‘heretics’. The Cathars, for one, were wiped out, the Huguenots another. They were considered ‘heretics’ for what, exactly? For the Church in Rome had become corrupt, corruption, selling fake bones as the relics of a lost and great saint. You’ll see very many religious debates going on this in this time. And a lot of Latin. A lot of latin. Dare I say, they had become more corrupt than the Greek-Roman Paganism priesthood had been. Everyone in this novel is acting in some peculiar way, for the will of God. But no one is following the commandments as set in the Bible. Not everybody of course is evil, let that be said. But you see where Andrzej got his inspiration from when he wrote the world of the Witcher. I loved Scharly, and the Giant named Samson. Two of the best characters in this novel.

This is a little confusing, what with all the names and duchies. As I am not too familiar with this area of history so much. But it is immersive. And a massive thank you to David French for taking on this arduous task of translating as it would not have been easy. Kudos to the cover designer team at Gollancz for making a fantastic effort. This is a historical fantasy, but to me it feels more light in terms of its fantasy content and delivers more on the historical fiction side. This could be because its setting the world up. I wonder if the developers at Kingdom Come Deliverance could hire Andrzej as their next writer for their upcoming games, because I see some similarities between the book and the video game which is set in Medieval Germany. Overall, this novel was great and I give it a 10/10!
Read more
9 people found this helpful
Helpful
Report abuse

My apologies to all who love this series but I gave up as there is so much out there to read that I will enjoy.

If this is a "good" example of this saga in book-form, I shall be sticking to the television adaptations. My 2 star rating reflects a less than neutral position as I totally failed to understand what the book was about.