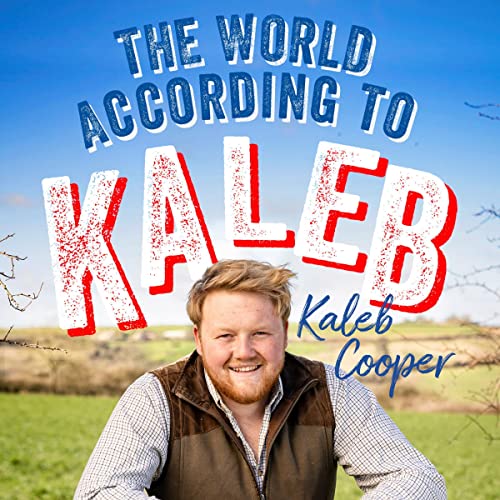 The World According to Kaleb

Kaleb Cooper (Author), Quercus (Publisher)
See all formats and editions
Sorry, there was a problem loading this page. Try again.

Introducing Clarkson's Farm favourite Kaleb Cooper's worldly wisdom on life's big issues, from the difference between straw and hay to the importance of having a hair perm.

Chipping Norton's celebrity farmer Kaleb Cooper has strong views on lots of things: sheep ('stupid'), Jeremy Clarkson ('f***ing idiot'), goats ('they're a proper good clear-up animal, they eat everything—no wonder they taste horrible'), New York ('if it's like London, where there are no tractors, that's no good') and more.

In The World According to Kaleb, he shares his thoughts on topics such as capital cities, famous people, hairstyles and why farming is the best job in the world. He even tells us why the chicken crossed the road. Dubbed 'the real star of Clarkson's Farm', Kaleb reveals his true, loveable, funny and down-to-earth self, with deadpan gags and unique observations that will have you crying with laughter.

Utterly hilarious, this is Kaleb as you've got to know him and love him on the hugely successful television series.

You won't be charged until release day

By completing your purchase, you agree to Audible’s Conditions Of Use and authorise Audible to charge your designated card or any other card on file. Please see our Privacy Notice.
Sold and delivered by Audible, an Amazon company

How customer reviews and ratings work


Your recently viewed items and featured recommendations
›
View or edit your browsing history
After viewing product detail pages, look here to find an easy way to navigate back to pages you are interested in.