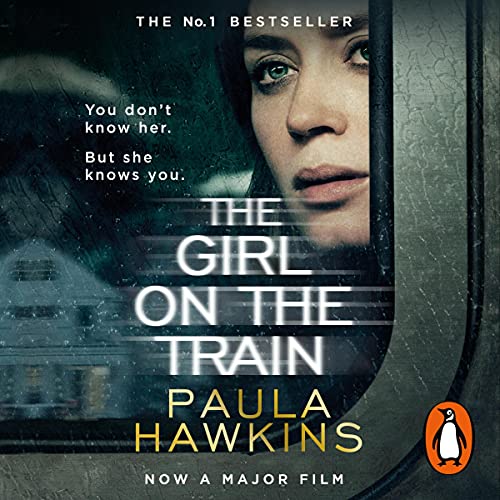 The Girl on the Train

Brought to you by Penguin.

Winner of the 2016 Audie Award for Audiobook of the Year.

Rachel catches the same commuter train every morning. She knows it will wait at the same signal each time, overlooking a row of back gardens. She’s even started to feel like she knows the people who live in one of the houses. ‘Jess and Jason’, she calls them. Their life - as she sees it - is perfect. If only Rachel could be that happy.

And then she sees something shocking. It’s only a minute until the train moves on, but it’s enough.

Now everything’s changed. Now Rachel has a chance to become a part of the lives she’s only watched from afar.

Now they’ll see; she’s much more than just the girl on the train....

Switch between reading the Kindle book & listening to the Audible narration with Whispersync for Voice.
Get the Audible audiobook for the reduced price of £5.99 after you buy the Kindle book.
Learn more about membership
List Price: £23.99
You Save: £3.00 (13%)
By completing your purchase, you agree to Audible’s Conditions Of Use and authorise Audible to charge your designated card or any other card on file. Please see our Privacy Notice.
Sold and delivered by Audible, an Amazon company

Amazon Customer
4.0 out of 5 stars One of the better examples of a psychological thriller.
Reviewed in the United Kingdom on 29 June 2020
"The Girl on the Train" is certainly one of the better examples of a psychological thriller. There are so many that are overly contrived and that use blatantly artificial cliffhangers in order to try to develop some kind of tension. Paula Hawkins succeeds in building the atmosphere without resorting to such tactics.The story is told in the first person from the perspective of three female characters: Rachel, Anna and Megan. As becomes apparent, each of the three narrators is unreliable and each reveals significant personal character flaws throughout the telling of the story. It is via these three accounts that the reader is gradually able to piece together the exact nature of events. This works well as a narrative mechanic, though I was not always convinced that the style of writing used for each of the three women differed enough from the others to come across as entirely authentic. I suppose it could be argued that this was done deliberately by the author to illustrate the commonality of the abuse they had been subjected to - but that may be being overly generous.Overall this was a satisfying read, with a largely credible, if significantly flawed, cast of characters. The main exception to this was the way that Tom finally fell apart. For someone who had been so controlling throughout his life, it didn't seem totally believable that he would fall apart in quite such a convenient manner at the end, but it did mean that the desired dramatic climax could be achieved.
Images in this review

Carlos
1.0 out of 5 stars Boring!!!
Reviewed in the United Kingdom on 15 February 2019
Verified Purchase
Took me months to read, normally I'll read a book in 2-3 days but this a struggle. It just plodded along and I really had to force myself to finish it.

How it got made into a film I'll never know. Poor characters and a weak ending. At one stage it felt like the book would never end.

Personally I would recommend not to waste your time with this. But it appears I am in the minority and a lot harder to please than the thousands that gave it a good review.

The Idle Woman
4.0 out of 5 stars Dark, unsettling and gripping: a real thriller
Reviewed in the United Kingdom on 21 February 2017
Verified Purchase
Oh boy. This is that rare thing: a bestseller that actually does live up to its reputation. Whatever you do, don’t start reading it if you have anything to do in the near future. As a contemporary thriller, it’s not the kind of book I’d normally read – but there’s been so much talk about it recently, I thought I’d better read it before it can be spoiled for me. And it was all that I expected and more, because I bought it without any real idea of what it was. It’s the kind of book you read with your heart in your mouth and the world around you strangely muted as if you’re submerged beneath water.

There’s only so much I can or will say, because I believe this book is best savoured ‘cold’ and unspoiled. We meet our narrator, Rachel, on her train commute to and from London. On most days a red signal halts the train next to a line of townhouses whose gardens run down to the track, and Rachel has become accustomed to watching the young couple who live in the nearest house. She grows fond of them; gives them names – Jess and Jason; invents histories for them, and savours their evident happiness. In their contented companionship they seem to encapsulate everything that Rachel herself has failed to achieve, lost in a haze of of a failed marriage and alcoholism – all the more so because they live just a few doors down from the house she herself lived in with her ex-husband. Jess and Jason become totemic figures to her, a reassuring sign that love can and does really exist in the world. But then, one Friday morning, Rachel sees Jess out in her garden with another man – a stranger. A kiss is exchanged. Shocked at this ugly turn of events, and moved to protect the wronged Jason, Rachel decides to intervene. But she is too late.

The reason this book keeps you reading, compulsively, greedily, is because you have three narrative strands, each of them gradually adding more pieces to the jigsaw, each of them converging slowly but surely on that moment when everything will make sense. Our three narrators are not necessarily liars, but they’re unreliable: they tell us only part of the story, or they forget; they’re driven by obsession, or they remember things mistakenly. And, as the story deepens, we come to realise that everyone has their own demons and that one’s fantasies of the perfect couple one spots from the train, in the midst of one’s own dull, unexciting life, are only that – a fantasy – perhaps darker and more dangerous than one could ever imagine.

And another thing about this book – it lingers. I feel positively tainted by its unsettling story – somehow dirty, uneasy, guilty. It’s a very strong piece of work, fast-paced and threatening, and I suggest you read it now, if you haven’t already.

Minijax
5.0 out of 5 stars A tale of three women
Reviewed in the United Kingdom on 20 November 2016
Verified Purchase
This is a very popular book, and I can understand its popularity, as I got into it very quickly, and read it over a period of about three days, really wanting to get back to it.

The novel moves backwards and forwards through time, telling the stories of three women, each in the first person, and this gives the narrative an intimacy and directness, which it might not have, if it were told in the third person.

The main protagonist, Rachel, sits on a train, watching the activities in the houses along the track, in particular, the road where she once lived happily with her husband.

As a writer, I could imagine the author sitting on that train, observing and writing what she saw, until suddenly the plot came to her.

In a voyeuristic fashion, Rachel focuses on a particular house where an apparently loving couple seem to live the sort of life that she once lived, before breaking up with her husband, and she fantasises about this other husband, and feels outrage, when it seems his trust has been broken. So far, any story is mainly in her head, but then the wife disappears, and Rachel gets involved in her disappearance.

The novel then moves back a year so that the wife - Megan - can describe her life and what happens to cause her disappearance, and eventually, half way through the book, jumping forward to the present again, Anna appears, Anna being the ‘other woman’ who is now married to Rachel’s ex-husband, Tom. The three narratives are woven together like a plait, as gradually the story takes shape, and eventually, the truth emerges.

The women’s names are all rather similar, all two syllables, and I wondered if this was deliberate, because in some respects, though on the surface apparently different, they are alike in some respects. None of them are very likeable, although once you are inside someone’s head, you can’t help having some empathy with them.

From a readability point of view, this really drew me in, but not only are the women rather unpleasant, or dysfunctional, the men aren’t very nice, either. So from that point of view, I can’t quite give it full marks, because I like to like the characters I’m spending my time with. So 9 out of 10, but probably 5 stars, here, just the same.
Read more
21 people found this helpful
Helpful
Report abuse
See all reviews