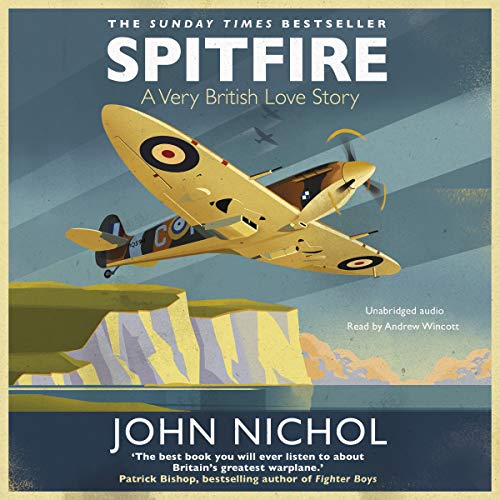 The iconic Spitfire found fame during the darkest early days of World War II. But what happened to the redoubtable fighter and its crews beyond the Battle of Britain, and why is it still so loved today?

In late spring 1940, Nazi Germany’s domination of Europe looked unstoppable. With the British Isles in easy reach since the fall of France, Adolf Hitler was convinced that Great Britain would be defeated in the skies over her southern coast, confident his Messerschmitts and Heinkels would outclass anything the Royal Air Force threw at them. What Hitler hadn’t planned for was the agility and resilience of a marvel of British engineering that would quickly pass into legend - the Spitfire.

Best-selling author John Nichol’s passionate portrait of this magnificent fighter aircraft, its many innovations and updates and the people who flew and loved them carries the listener beyond the dogfights over Kent and Sussex. Spanning the full global reach of the Spitfire’s deployment during WWII, from Malta to North Africa and the Far East, then over the D-day beaches, it is always accessible, effortlessly entertaining and full of extraordinary spirit.

Here are edge-of-the-seat stories and heart-stopping firsthand accounts of battling pilots forced to bail out over occupied territory; of sacrifice and wartime love; of aristocratic female flyers; and of the mechanics who braved the Nazi onslaught to keep the aircraft in battle-ready condition. Nichol takes the listener on a hair-raising, nail-biting and moving wartime history of the iconic Spitfire populated by a cast of redoubtable, heroic characters that make you want to stand up and cheer.

Switch between reading the Kindle book & listening to the Audible narration with Whispersync for Voice.
Get the Audible audiobook for the reduced price of £2.99 after you buy the Kindle book.
Learn more about membership
List Price: £14.39
You Save: £1.80 (13%)
By completing your purchase, you agree to Audible’s Conditions Of Use and authorise Audible to charge your designated card or any other card on file. Please see our Privacy Notice.
Sold and delivered by Audible, an Amazon company

Amazon Customer
1.0 out of 5 stars Damaged cover!
Reviewed in the United Kingdom on 24 December 2020
The delivery and packaging were both fine but on opening the cover of the book was torn. The item is a Christmas present so need to give it rather than return it but disappointing that the item was damaged.
Images in this review

CJ BARROWS
5.0 out of 5 stars YOU MUST READ THIS!
Reviewed in the United Kingdom on 19 June 2018
Verified Purchase
Quite the best book I've read on the subject and couldn't put it down. Not a technical nuts and bolts story as this detail is covered by many other veritable tomes but instead a human and personal perspective from those who flew, serviced and maintained this truly iconic aircraft in all theatres of WW2. Includes some moving stories of love and loss but all the while underpinned by a love of this amazing and beautiful aircraft. The only minor error by John Nichol, not an expert on all things Spitfire, is his reference to Mk 8's having a low back fuselage and tear drop canopy which to my mind they never had, this modification being introduced with the Mk 16 and some later Mk 14's. Just wished it was 200 pages longer!

Aplogies to John as apparently Mk 8 Spitfire JF299 was the first ever example to be fitted with a tear drop canopy and cut down fuselage in the summer of 1943, even though I've never ever seen a pic of such an example in action so not sure how many were ever made in this configuration. Just goes to show the level of research he carried out in order to write this wonderful book and how even a true afficiando like myself for over 40 years can still learn something new.

Mr. A. D. Steele-leith
5.0 out of 5 stars Amazing read!
Reviewed in the United Kingdom on 29 May 2018
Verified Purchase
I brought this book on recommendation from of all people Carol Vorderman. Had it on the train today, and its quite right, VERY difficult to put this down. Amazing read!

Update: I am close to 100 pages into this and for the record many of the meaty ones i read i never get that far with, but this is amazing. Totally feel for the pilots, indeed the country. Never read one like it. If you're going to buy this, ensure before you pick it up that you have an afternoon or day spare, as you will find this tough to put down after.
Read more
28 people found this helpful
Helpful
Report abuse

Chris Wilson
5.0 out of 5 stars A beautiful and lovingly crafted book
Reviewed in the United Kingdom on 28 May 2018
Verified Purchase
A beautiful and lovingly crafted book. You can tell from the words and the way the book has been presented that the author cared deeply about his subject and doing justice to this iconic aircraft and the memories of the men and women who flew her, worked on her and died in her. If you have read John's other work you will be already be aware of his ability to weave historical fact with first hand accounts and anecdotes. His style is clear, succinct and eminently readable.

At times harrowing and at times true 'boys own' stuff, this book will leave you amazed by the daring tales of those who fought this aircraft. It looks not just at the Battle of Britain but also beyond to many other theatres of conflict where the Spitfire excelled, such as the Mediterranean, North Africa and Far East. This is a book to be cherished by aviation enthusiasts and general readers alike.
Read more
24 people found this helpful
Helpful
Report abuse

Ian Barker
5.0 out of 5 stars Never fails to enthral
Reviewed in the United Kingdom on 17 August 2018
Verified Purchase
Although it’s over 70 years since its finest hour, the Spitfire retains a unique place in the British consciousness as a symbol of hope and, ultimately, of victory.

Nichol, an ex-RAF man himself, interviewed a number of veterans for this book and it is the tale not so much of the aeroplane but of the men and women who flew and worked on it. The pilots’ stories make up the bulk of the book, from ‘The Few’ of the Battle of Britain, to the photo reconnaissance pilots who flew unarmed Spitfires deep into Nazi Germany, and the female ferry pilots who delivered them to squadrons. The narrative never fails to enthral.

It would have been nice to see a bit more about the people who built and maintained the aircraft, but what is clear from the book is that everyone who came into contact with it has developed a deep and enduring love for the Spitfire.
Read more
14 people found this helpful
Helpful
Report abuse

E Griffith
4.0 out of 5 stars One view of an iconic aircraft
Reviewed in the United Kingdom on 20 November 2020
Verified Purchase
There are some critics here moaning about how more should have been written about the history of the Spitfire and how it was built etc. There are other books covering that. That’s not what this book’s about. It’s about the feelings of the people who flew them. Men (and women!) who were about 20 yrs old at the time and lived through 6 years of warfare throwing this aircraft around the skies protecting the UK and winning the war all over the world. Many of these pilots died before the book was published but, thanks to this, their youthful exploits of derringdo lives on. Brave, brave pilots in a fine, developing aircraft. We owe them and the Spitfire’s development a huge debt and I salute them.
Read more
5 people found this helpful
Helpful
Report abuse

deeayjay
5.0 out of 5 stars Do not moss this book
Reviewed in the United Kingdom on 5 June 2018
Verified Purchase
I have just finished reading ‘Spitfire: A Very British Love Story. This volume is different from othe volumes on this aircraft in that it is not just a list of pictures with associated facts and figures; it tells the story from the perspective of those who flew and maintained the most beautiful aircarft ever to take to the skies. John has done them proud with this volume. I’m still smiling about Brian Bird, a ninety year old WWII veteran, given the chance to fly as a passenger wanting to take it for a solo flight. A special generation remebered as they should be: Heros one and all
Read more
20 people found this helpful
Helpful
Report abuse
See all reviews