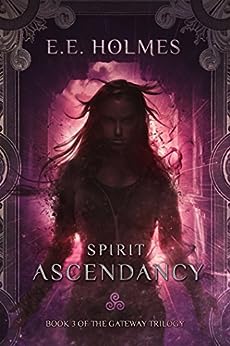 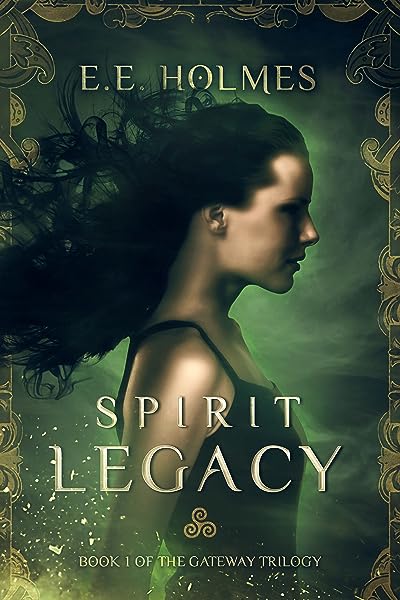 by E.E. Holmes (Author) Format: Kindle Edition
Book 3 of 3: The Gateway Trilogy
See all formats and editions
Sorry, there was a problem loading this page. Try again.
A power too terrible to control...

In the wake of their terrifying escape from Fairhaven Hall, sisters Jess and Hannah Ballard find themselves on the run, pursued by the two most powerful groups in the history of the spirit world. On one side, the Durupinen, determined to capture the girls and prevent their role in an ancient prophecy that promises to destroy them and unleash the spirit hordes on the earth. On the other side, the Necromancers, ancient enemies of the Durupinen, hellbent on bringing the same prophecy to fruition. When the girls are betrayed and one of them falls into the Necromancers’ hands, both face decisions with cataclysmic consequences.

Will the lure of power prove too great to resist, or will the bond between the sisters survive this last, most crucial of tests?

Spirit Ascendancy: Book 3 of the Gateway Trilogy is the third of ten thrilling paranormal page-turners in "The World of the Gateway" series by E.E. Holmes.

What Amazon readers are saying:

★★★★★ 'One of THE BEST ghost themed paranormal books I've ever read!'

★★★★★ 'Twilight combined with Harry Potter and then some!'

★★★★★ 'Holmes has written a lovely series with something for everyone; humor, self reflection, loyalty, mystery, intrigue, action and so much more.'

★★★★★ 'If you're into the paranormal, like ghosts, ghost hunting, ghost stories, crossing over, Gaelic folklore, dark secrets, plot twists that I didn't even see coming (and I am a writer myself!) and even a little magic, you should definitely read this book.'

Experience the captivating paranormal series that obsessed readers have described as “unputdownable” and “spellbinding”. If you love ghost stories, with plenty of action and suspense, along with a tough and independent heroine you’ll want to stand up and cheer for, you will fall in love with this best-selling series… but proceed with caution: you’ll be up all night reading!

E.E. Holmes grew up near Boston, Massachusetts, where she spent the majority of her childhood reading books. She read them almost constantly, and as a result, perfected the art of walking and reading at the same time, a skill she can still perform to this day with remarkably few instances of falling on her face. She also wrote many books and poems in blank books and on the backs of legal pads her father brought home from the office. They remain some of her finest work. She soon learned to love literature of the dramatic persuasion, and earned a B.A. in theater from the College of the Holy Cross. After graduation, she set out to prove that her degree was, in fact, not useless, and worked as a principal actor in a summer Shakespeare festival and as a theater teacher, directing over thirty productions and numerous workshops for youth and high school students. She spent seven years as the theater director at Wakefield High School where she also taught English literature and public speaking. It was in her classroom that she discovered the horrible truth: a disturbingly large percentage of high school students hate to read. This revelation devastated and bewildered her. She decided she wanted to do something about it, and thus she started work on her first young adult novel, Spirit Legacy: Book 1 of the Gateway Trilogy, which has gone on to win awards from Chanticleer Book Reviews and Media and The Independent Publisher Book Awards. She is also the author of Spirit Prophecy, Book 2 of the Gateway Trilogy, and three one act plays, one of which premiered at the Edinburgh Fringe Festival in 2009 to rave reviews. E.E. Holmes lives in central Massachusetts with her husband, two children, and small, but surprisingly loud dog. When not writing, she enjoys watching unhealthy amounts of British television, procrastinating, and rediscovering her favorite books from her childhood all over again with her kids. --This text refers to the paperback edition.

E.E. Holmes is the internationally best-selling author of "The Gateway Trilogy", "The Gateway Trackers", and "The Riftmagic Saga" series. Her first novel, Spirit Legacy, was named a first-place category winner in both the Paranormal Awards and the Dante Rossetti Awards for YA Fiction by Chanticleer Book Reviews and Media.

Connect with E.E. Holmes on most social media platforms @authoreeholmes

Sign up for the E.E. Holmes VIP newsletter for exclusive content, new release announcements, and more at eeholmes.com

Ninaminacat
4.0 out of 5 stars What an imagination E E Holmes has!
Reviewed in the United Kingdom on 16 October 2016
Verified Purchase
After finding Spirit Prophecy a little pedestrian (for a reader well outside the target audience) this was back up there with all the drama of Spirit Legacy. The conflict between the Necromancers and the Durupinen certainly gives E E Holmes scope for some imaginative and original supernatural action. She also develops Jess' and Hannah's own remarkable and constantly evolving powers in some unexpected ways to bring them new experiences and new and ever more perilous dangers.

As the narrative unfolded, it was rewarding to see that Jess' story really had been conceived as a trilogy, since there were clear plot tie-ins with the earlier books, with some of these details being essential for later plot development. At least one of the revelations made on the way may have been obvious to the reader, if not the characters, but others were totally unexpected, so if you are part way through the trilogy, keep reading!

By the by, one detail which caused me difficulty was caged raven. Ravens are huge birds - about 2 feet tall and with a 4 foot wingspan, so it must have been some cage on some pedestal! I am nit-picking over a small point in a great, escapist read.
Read more
4 people found this helpful
Helpful
Report abuse

John S.
5.0 out of 5 stars Good read, huge and fascinating storylines.
Reviewed in the United Kingdom on 31 December 2021
Verified Purchase
An easy read rounding off the trilogy. This story kept me gripped from start to finish. The characters develop perfectly with their interactions developed in interesting ways as the storytelling covers ever expanding threads of exciting natural and supernatural episodes. Hard to put the books down. Thrilling.
Read more
Helpful
Report abuse

Giraffe
5.0 out of 5 stars A spiritual version of Harry Potter would make a gr8 movie
Reviewed in the United Kingdom on 1 November 2021
Verified Purchase
I liked the books very much, reading them one straight after the other. I thought the grandfather was going to play a bigger part but that could be for another book?
I was suckered into believing someone in it was a goody so a surprise was revealed there.
I look forward to finding more books on the story.
When's the movie coming out???
Read more
Helpful
Report abuse

DJHEW
4.0 out of 5 stars Not as good as first two, but still an amazing trilogy
Reviewed in the United Kingdom on 28 November 2019
Verified Purchase
Great trilogy, but found this third book underwhelming. Ending was good, but found the story a bit disappointing if honest. Savvy was a great character but ended up finding the continued use of 'mate', 'oi oi' etc a bit too much, and few other characters became a bit flat. Saying that, i found this to be a wonderful trilogy overall, and I have already bought the next series to continue the story!!!.
Read more
Helpful
Report abuse

Mrs Bond
5.0 out of 5 stars Sooooo good
Reviewed in the United Kingdom on 27 July 2022
Verified Purchase
Honestly I can't wait for more this is so so yummy!!! I could eat it all up!
I love the characters and the world you have created. Consider me transported.
Read more
Helpful
Report abuse

Mike
3.0 out of 5 stars The outcome was defined on page 3 making the book unnecessary
Reviewed in the United Kingdom on 13 January 2020
Verified Purchase
Ok, Jess saves the world, that was clear from the very start of the book. How became clear 25% of the way in. Making 75% of the book padding to get to the big finish.

Don’t get me wrong, well written, a few twists and turns, but everything which happens was predictable.

Hilary T.
5.0 out of 5 stars Really excellent, entertaining trilogy.
Reviewed in the United Kingdom on 19 May 2016
Verified Purchase
I only bought this trilogy because each e-volume was on special offer at 99p and at that price, I felt that I had nothing to lose. However, I am so glad that I did buy them because I found myself caught up in the characters and story virtually immediately. The author put flesh on the bones of the characters, bringing them to life, and I actually cared if they lived or died - always a good test. I found myself totally involved in the stories as they unfolded and was very reluctant to have to tear myself away. The idea of gateways through which lost spirits needed to pass, and guardians to usher them through, being manipulated and distorted by various groups for their own ends, was a very clever concept and made for an entertaining good v bad read. I highly recommend this trilogy to anyone liking the fantasy / sci-fi genre
Read more
One person found this helpful
Helpful
Report abuse

Kindle Customer
5.0 out of 5 stars Loved it !!!!!
Reviewed in the United Kingdom on 24 March 2022
Verified Purchase
I was hooked from the first book in the series. I found myself reading and losing track of time. The characters came alive for me I could see and feel all that was going on. I can’t wait to read the next book.
Read more
Helpful
Report abuse
See all reviews
Report an issue
Does this item contain inappropriate content?
Report
Do you believe that this item violates a copyright?
Report
Does this item contain quality or formatting issues?
Report