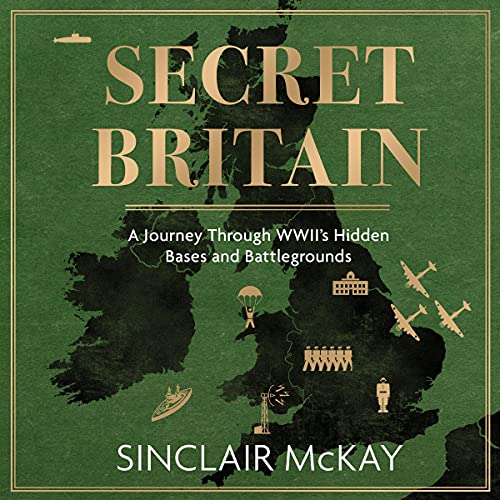 Secret Britain: A Journey Through the Second World War's Hidden Bases and Battlegrounds

Sinclair McKay (Author, Narrator), Headline (Publisher)
4.5 out of 5 stars 103 ratings
See all formats and editions
Sorry, there was a problem loading this page. Try again.

Discover the stories of the brave men and women who worked, trained and fought across the UK, from Bletchley Park in southern England all the way to Arisaig in northern Scotland, in an unbelievable effort to defeat the Nazis and win the Second World War.

From the outset of the war, most of Britain felt like a mystery even to those who lived there. All road and railway signs were removed up and down the country to thwart potential enemy spies. An invisible web of cunning spread across the United Kingdom; secret laboratories were hidden in marshes, underground bases were built to conceal key strategic plans, and grand country houses became secret and silent locations for eccentric boffins to do their confidential cryptography work.

In Secret Britain, Sinclair McKay maps out the UK through the hidden bases and battlegrounds of WWII. These locations are full of history and intrigue, but if you don't know where to look, you might just miss them. Journeying through secret wildernesses, suburbs, underground tunnels and manor houses, Sinclair gives a glimpse into the stories of the incredible people behind the war effort, and shows how you might be able to visit these mysterious and evocative locations yourself.

With his trademark warmth and compassion, Sinclair unearths the truths of the war that have remained under layers of secrecy since the war was won in 1945.

Switch between reading the Kindle book & listening to the Audible narration with Whispersync for Voice.
Get the Audible audiobook for the reduced price of £7.49 after you buy the Kindle book.
Learn more about membership
List Price: £19.99
You Save: £2.50 (13%)
By completing your purchase, you agree to Audible’s Conditions Of Use and authorise Audible to charge your designated card or any other card on file. Please see our Privacy Notice.
Sold and delivered by Audible, an Amazon company

militaryman-WMAHM
3.0 out of 5 stars Only a few places mentioned, so not worth buying.
Reviewed in the United Kingdom on 17 November 2021
Verified Purchase
The write-up makes the book seem very interesting. However, on opening it I found it was quite a let down, with only a few of the many that exist, or existed, mentioned. The authors reputation has gone a long way down after reading this book, with other books of a similar type providing far more information, plus printed on a better quality paper, so that any photos used can be clearly seen, even though taken many years ago. I live not far from the oilfield tanks at Invergordon, and went to see them when they were full of Furnace Fuel Oil,. Whilst the author mentions the oil had to be heated in the underground cells, he missed that the long pipeline down to the end of the Admiralty Pier at Invergordon., which still has the heating element boxes situated down alongside the road from the cells to where quite a number of the above ground tanks can still be seen, as are the 2 pump houses that were required to pump the fuel up into the hill where the tanks were constructed. Other sites mentioned all seem to have their story condensed so much that it makes it look as if the author was in a hurry to get the work off to the publishers, which is why it rates so low in my opinion.
Read more
14 people found this helpful
Helpful
Report abuse

zigzag
2.0 out of 5 stars Lacking detail, lightweight, superficial
Reviewed in the United Kingdom on 25 February 2022
Verified Purchase
Although there is a huge story to tell about secret Britain the author barely scratches the surface of any of it. Each place has a few pages of very lightweight writing, not telling the reader anything. Im not sure what the purpose of this book is a history or a guidebook, but it fails on both counts. There are better books for histories, the internet is better as a guidebook.
Read more
4 people found this helpful
Helpful
Report abuse

L. Harding
1.0 out of 5 stars Could have been brilliant
Reviewed in the United Kingdom on 27 December 2021
Verified Purchase
I was excited to read this book but the fact checking and proof reading sadly let’s it down. In particular the section about 617 squadron, the Dambusters has some glaring errors which really shouldn’t have been allowed through proofing.
Read more
3 people found this helpful
Helpful
Report abuse

jsphd
5.0 out of 5 stars Nice hard-back at a decent price
Reviewed in the United Kingdom on 4 January 2022
Verified Purchase
Bought for myself and currently enjoying the read.
Read more
One person found this helpful
Helpful
Report abuse

Phil
1.0 out of 5 stars Lightweight and full of errors
Reviewed in the United Kingdom on 10 February 2022
I received this book for Christmas having expressed an interest in it earlier. What a let down. The blurb on the cover describes the author as "the No 1 Bestselling Author" - of what? It goes on to say he writes for the Telegraph and Spectator although this offering is writtenin the hyperbolic style of a red top newspaper. The prefixes Hyper and super litter the text unneccesarily. Then the content. It is as superficial as a red top newpaper story or a report on the BBC News website and goes downhill from there. It is full of mistakes both spelling, factual and geographic. We are told that the Dambusters raid was carried out by Squadron 17 - a schoolboy error. It is suggested that the QWuantocks and Mendips in Somerset are the same. The author believes that Dorset looks out over an ocean rather than the Channel and that the River Dyfi flows into the Atlantic rather than the Irish Sea ot St Georges Channel. The Canary Girls were much more associated with ammunition workers in World War 1. I could go on. If the author paid a proof reader, he was fleeced, if he did not, he should have.
Read more
2 people found this helpful
Helpful
Report abuse

pam howlett
5.0 out of 5 stars Secret Britain
Reviewed in the United Kingdom on 12 October 2021
Verified Purchase
Bought this for a birthday present and it was very much appreciated.
Read more
3 people found this helpful
Helpful
Report abuse
See all reviews