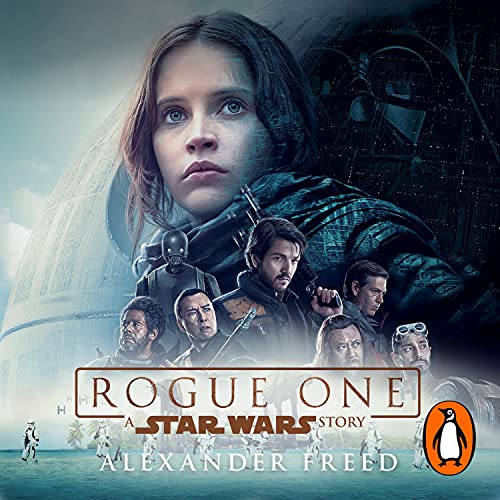 Rogue One: A Star Wars Story

Go beyond the film with a novelization featuring new scenes and expanded material.

As the shadows of the Empire loom ever larger across the galaxy, so do deeply troubling rumors. The Rebellion has learned of a sinister Imperial plot to bring entire worlds to their knees. Deep in Empire-dominated space, a machine of unimaginable destructive power is nearing completion. A weapon too terrifying to contemplate...and a threat that may be too great to overcome.

If the worlds at the Empire's mercy stand any chance, it lies with an unlikely band of allies: Jyn Erso, a resourceful young woman seeking vengeance; Cassian Andor, a war-weary rebel commander; Bodhi Rook, a defector from the Empire's military; Chirrut Ïmwe, a blind holy man; his crack-shot companion, Baze Malbus; and K-2SO, a deadly Imperial droid turned against its former masters. In their hands rests the new hope that could turn the tide toward a crucial Rebellion victory - if only they can capture the plans to the Empire's new weapon.

But even as they race toward their dangerous goal, the specter of their ultimate enemy - a monstrous world unto itself - darkens the skies, waiting to herald the Empire's brutal reign with a burst of annihilation worthy of its dreaded name: Death Star.

Switch between reading the Kindle book & listening to the Audible narration with Whispersync for Voice.
Get the Audible audiobook for the reduced price of £2.99 after you buy the Kindle book.
Learn more about membership
List Price: £23.99
You Save: £3.00 (13%)
By completing your purchase, you agree to Audible’s Conditions Of Use and authorise Audible to charge your designated card or any other card on file. Please see our Privacy Notice.
Sold and delivered by Audible, an Amazon company

Amazon Customer
5.0 out of 5 stars Best Star Wars book I've read.
Reviewed in the United Kingdom on 8 November 2017
Wow, I love Jyn, one of the best Star Wars characters ever. All her soldiers are amazing and it was good to read this fabulous story, great dialogue, emotion, description of everything and so sad at the end, yes I've seen the film twice but the book is awesome. I will read other Jyn books as she's such an interesting character.
Images in this review

Freya of Asgard
5.0 out of 5 stars A riveting novel
Reviewed in the United Kingdom on 13 February 2017
Verified Purchase
I loved the movie “Rogue One” and I think that this tie-in novelization is really good. The text is well written, the prose is flowing and it is an enjoyable reading. The book follows the movie plot quite closely and there are some interesting extra at the end of some of the chapters. These extra are presented as epistolary interludes that give further details on the Death Star building and on the Rebellion, especially on Mon Mothma. Characters are well sketched and especially Jyn and Cassian are traced in depth as well Galen Erso personal tragedy.

It is a very gripping book and the final is as moving as in the movie. The edition is well-finished.
A must-have for Star Wars fans!

J. L. Carter
5.0 out of 5 stars Bought to read out as a bed time story book.
Reviewed in the United Kingdom on 21 September 2017
Verified Purchase
Other than some minor errors with grammar and spelling, this book is excellent. Reading it out loud as a bed time story has even had me in tears towards the end (which made story time a bit hard at times), I was genuinely surprised at just how emotive this story was. I felt a real attachment to the characters, although the description of the how the pilot they spend ages hunting for, is lost at the end could have been better, he deserved better. Even with the clean language and connection to Star Wars, this is hardly a kids book though. In truth, no kids book has made me feel so sad at the end since Philip Pullman's Amber Spyglass.

This was my first Star Wars book and if they are all this good, story time is going to be exciting for me too for the next few months.
Read more
4 people found this helpful
Helpful
Report abuse

Alaran
4.0 out of 5 stars Stardust and the Death Star
Reviewed in the United Kingdom on 6 June 2017
Verified Purchase
This is a fairly strong novelisation of the film. It successfully manages to capture the spirit of the original whilst embellishing on the background and characterisation. It is a positive rendition that makes for an exciting read.

The novel embellishes upon the characters quite well, even K2-SO and the usually allusive Mon Mothma. Understandably, the bulk of the material focusses upon the outlooks of Jyn, Cassian and Krennic; these three being the predominant characters of the story. The author has a strong understanding of both Jyn and Krennic and enriches both by providing an emotional depth that there wasn’t space for in the film to such a degree. Cassian, perhaps, isn’t so well grasped though, feeling at times somewhat different to that on onscreen. However, the author does provide a reasonably intriguing insight into his motivations.

Pilot Bodhi Rook receives some great treatment from the author. His character is widely expanded and the reader is given more information on his background, his relationship with Galen and his motivations for defecting. Raddus receives a similar treatment, although not to the same degree.

Despite the proclamation on the book that it contains deleted and extended scenes there really isn’t that much in the way of extra material. Certainly nothing substantial or of any relevance plot wise. What there is, though, are various interludes in the form of missives or communications. A lot of the time these aren’t particularly relevant or necessary and sometimes detract from the atmosphere and pacing. However, Mothma’s account of Jyn and views on the Clone Wars are worthwhile, often providing more of an insight into Mothma than their subjects.

If you haven’t yet seen the film, the below contains possible spoilers.

During the latter stages of the novelisation the author does a fine job with the antenna relay sequence. It is possibly here that he is most successful at getting into the mindset of Jyn and Krennic, providing an extra emotional charge. The slight re-arrangement of what takes place by having the Death Star seen in the sky slightly earlier adds to this. It also gives Krennic’s fate more of a sense of poetic justice.

However, the full dramatic performance of the Vader scenes towards the end isn’t quite captured in the novelisation. The recount of the scene is a little flat and feels truncated. Vader lacks presence. Oddly, his earlier appearance is superbly realised. Having the scene portrayed through the eyes of Krennic, with his changeable moments of fear and bravado, really emphasises the terrifying nature of being in Vader’s presence.
Read more
4 people found this helpful
Helpful
Report abuse

John Hopper
TOP 1000 REVIEWERVINE VOICE
3.0 out of 5 stars decent novelisation, adds fairly little to the film version
Reviewed in the United Kingdom on 23 December 2017
Verified Purchase
I was prompted to read this novelisation after rewatching the Rogue One film earlier this week, after going to see The Last Jedi and getting in an annual Star Wars-y mood. This is a fairly workmanlike novelisation, with some additional background given for Jyn Erso and the complex relationship between her father Galen and Orson Krennic, but not a lot else. The sadness and tragedy of the loss of innocent lives, represented by the small girl Jyn (temporarily) saves from crossfire in a street battle in the Holy City of Jedha, comes across well, and the last twenty pages or so are moving, but otherwise this didn't really catch light for me.
Read more
3 people found this helpful
Helpful
Report abuse

Kate Coleman
5.0 out of 5 stars Excellent Adaptation
Reviewed in the United Kingdom on 21 May 2017
Verified Purchase
I've been bitten once or twice by film adaptations, but my fears were totally unfounded when it came to Rogue one. This is an excellent adaptation of a brilliant film. The author handles the character arcs beautifully, deepening what we know about Jyn, Cassian, Krennic, Galen, Baze, Chirrut and Bodhi, and even some of the more fleeting characters get a snippet of revealing backstory that adds to the emotion of the tale. His handling of description is great, and he even managed to pull off the appearances of the Droids in a convincing manner. This is a story about war, yes, but it is mostly a story about people, and the way that war shapes their personalities and ravages their lives. A thoroughly engaging read. I'm off to read Mr Freed's 'Star Wars Battlefront' next.
Read more
2 people found this helpful
Helpful
Report abuse

Sue K.B.
5.0 out of 5 stars well written - loved it
Reviewed in the United Kingdom on 22 May 2017
Verified Purchase
I thoroughly enjoyed this book. Doesn't bother me at all that I have seen the film and therefore already know what is coming in the story. It is really well written and gives an extra perspective as with the written word you are given more details and an insight into the thoughts of the characters. Loved it and have just re-read it. I liked the film too.
Read more
Helpful
Report abuse

mr carl
5.0 out of 5 stars Five Stars
Reviewed in the United Kingdom on 27 February 2017
Verified Purchase
Awesome story, some of the best descriptions of a space battle and ground battle I have ever read.
Read more
5 people found this helpful
Helpful
Report abuse

B.N.Hancock
4.0 out of 5 stars Not as good as the film
Reviewed in the United Kingdom on 16 May 2020
Verified Purchase
I have always stayed away from film novelisations as the authors always seem to miss something from the film. After reading Catalyst i read this as its sequel.
Its ok, but maybe i expected more. Theres lots of detail in it, but its expanded in some strange places. Not as good as the film - i am biased tho
Read more
Helpful
Report abuse
See all reviews