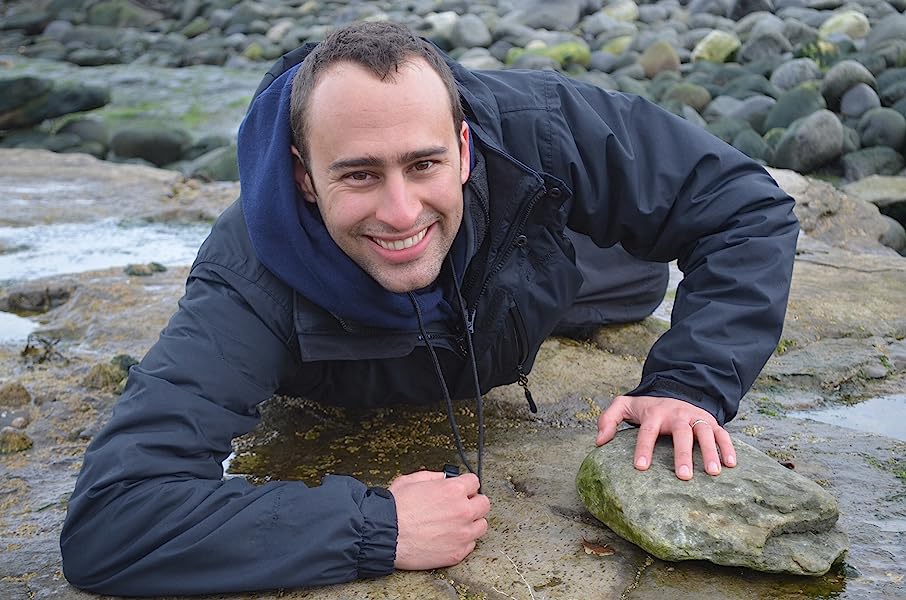 The Rise and Reign of the Mammals: A New History, from the Shadow of the Dinosaurs to Us Hardcover – 9 Jun. 2022

by Steve Brusatte (Author)
4.6 out of 5 stars 323 ratings
#1 Best Seller in Wild Mammals
See all formats and editions
Sorry, there was a problem loading this page. Try again.
Note: This item is eligible for FREE Click and Collect without a minimum order subject to availability. Details
Pick up your parcel at a time and place that suits you subject to availability. How to order to an Amazon Pickup Location? Learn more

‘Steve Brusatte, the author of The Rise and Fall of the Dinosaurs, brings mammals out from the shadow of their more showy predecessors in a beautifully written book that . . . makes the case for them as creatures who are just as engaging as dinosaurs.’ – The Sunday Times, ‘Best Books For Summer’

'In this terrific new book, Steve Brusatte . . . brings well-known extinct species, the sabre-toothed tigers and the woolly mammoths, thrillingly back to life' – The Times

The passing of the age of the dinosaurs allowed mammals to become ascendant. But mammals have a much deeper history. They – or, more precisely, we – originated around the same time as the dinosaurs, over 200 million years ago; mammal roots lie even further back, some 325 million years.

Over these immense stretches of geological time, mammals developed their trademark features: hair, keen senses of smell and hearing, big brains and sharp intelligence, fast growth and warm-blooded metabolism, a distinctive line-up of teeth (canines, incisors, premolars, molars), mammary glands that mothers use to nourish their babies with milk, qualities that have underlain their success story.

Out of this long and rich evolutionary history came the mammals of today, including our own species and our closest cousins. But today’s 6,000 mammal species - the egg-laying monotremes including the platypus, marsupials such as kangaroos and koalas that raise their tiny babies in pouches, and placentals like us, who give birth to well-developed young – are simply the few survivors of a once verdant family tree, which has been pruned both by time and mass extinctions.

In The Rise and Reign of the Mammals, palaeontologist Steve Brusatte weaves together the history and evolution of our mammal forebears with stories of the scientists whose fieldwork and discoveries underlie our knowledge, both of iconic mammals like the mammoths and sabre-toothed tigers of which we have all heard, and of fascinating species that few of us are aware of.

For what we see today is but a very limited range of the mammals that have existed; in this fascinating and ground-breaking book, Steve Brusatte tells their – and our – story.

The epic story of how our mammalian cousins evolved to fly, walk, swim, and walk on two legs . . . [Brusatte's] deep knowledge infuse[s] this lively journey of millions of years of evolution with infectious enthusiasm. -- Neil Shubin, bestselling author of Your Inner Fish and University of Chicago paleontologist


A fascinating account of how mammals survived the great extinction that destroyed the dinosaurs and evolved to their current position of dominance. A worthy sequel to [Steve Brusatte's] The Rise and Fall of Dinosaurs. -- Venki Ramakrishnan, 2009 Nobel Prize winner in Chemistry and Cambridge University biologist

Riveting . . . A real page-turner that proves science fact is more amazing than science fiction. ― The Sun

Nothing short of a thriller, revealing the luck, evolutionary twists and near-apocalyptical catastrophes that have led to the mammals of today, us included . . . Fascinating revelations come thick and fast ― Guardian

Deeply researched and entertaining . . . Brusatte’s real achievement is to show us that, for all its sheer weight of numbers and impact, Homo sapiens is just ‘a single point, among millions of species over more than 200 million years. -- Mark Cocker, ― The Spectator

Terrific . . . a saga on the grandest scale . . . beautifully told . . . Brusatte brings well-known extinct species, the sabre-toothed tigers and the woolly mammoths, thrillingly back to life ― The Times,

Stands out for its brilliant balance of scientific detail and lively, efficient storytelling ― New Scientist

Professor Steve Brusatte is a palaeontologist on the faculty of the School of GeoSciences at the University of Edinburgh in Scotland. He grew up in the Midwestern United States and has a BS in Geophysical Sciences from the University of Chicago, MSc in Palaeobiology from the University of Bristol, and PhD in Earth and Environmental Sciences from Columbia University in New York. Steve is widely recognized as one of the leading palaeontologists of his generation. He has written over one hundred and fifty peer-reviewed scientific papers during his 15 years of research in the field, named and described over a dozen new species of dinosaurs and mammals, and led groundbreaking studies on how dinosaurs rose to dominance and went extinct and how mammals replaced them afterwards. Among his particular research interests are the evolutionary transition between dinosaurs and birds and the rise of placental mammals, and he is a noted specialist on the anatomy, genealogy, and evolution of the carnivorous dinosaurs like Tyrannosaurus and Velociraptor. His 2018 book, The Rise and Fall of the Dinosaurs was a Sunday Times bestseller, and he is the science consultant for Jurassic World 3, the forthcoming film in the Jurassic Park franchise.
Start reading The Rise and Reign of the Mammals on your Kindle in under a minute.

Steve Brusatte is a paleontologist who hunts and writes about dinosaurs. He is on the faculty of the University of Edinburgh in Scotland, but grew up in the Midwestern USA. Steve has traveled around the world digging up dinosaurs and, working with many international colleagues, has named more than 15 new species, including the tyrannosaur 'Pinocchio rex' (Qianzhousaurus) and the raptor Zhenyuanlong. He has written several books for kids and adults, most notably the adult pop science book The Rise and Fall of the Dinosaurs (2018), which was a New York Times bestseller in the USA, Sunday Times bestseller in the UK, and Globe &amp; Mail bestseller in Canada. His work is covered often by the popular press and he has appeared on several television shows, such as the National Geographic extravaganza T. rex Autopsy, where he was part of the team that dissected a scientifically accurate life-sized model of a T. rex.

robert graham
5.0 out of 5 stars A very well written account of mammalian evolution.
Reviewed in the United Kingdom on 27 July 2022
Verified Purchase
This is a good modern account of the evolution of the mammals, with an emphasis on some of the people who discovered the fossils and their relationships to the evolutionary history of the class. This probably makes it a more enjoyable read to a layperson such as myself. But there is no lack of technical explanations also. However, as other reviewers have pointed out, the pictures are a let down. The photos seem dull and rather confusing. Surely better ones are available. Also, I found not enough reconstructions of the extinct species are provided. I know this is probably more important to a non scientist but it would have made the book more attractive. There are some excellent line drawings by Todd Marshall and Sarah Shelley. More of these would have done the trick. However, apart from this, I found it an excellent book and would recommend it to anyone who wants to know more about this subject.
Read more
Helpful
Report abuse

Peter S
5.0 out of 5 stars A fascinating and informative analysis
Reviewed in the United Kingdom on 27 June 2022
Verified Purchase
I had already read Steve Brusatte‘s earlier account of the Rise and Fall of the dinosaurs and was suitably impressed. Far from not disappointing: this volume exceeds all expectations. Rarely have I found myself so gripped by a non-fiction narrative. Many of his revelations are genuinely surprising and Brusatte succeeds in establishing a fascinating account of mammalian development and evolution. Particularly impressive are his explanations of the climatic and geographic scenarios which dictated the evolution and extinction of species. I would have liked to have seen more use of artistic impressions of creatures described but this did not detract from the strength of the written word or the painstaking analysis of dental and skeletal developments.
Read more
Helpful
Report abuse

Mrs Deborah F Cotterill
4.0 out of 5 stars Good book
Reviewed in the United Kingdom on 13 June 2022
Verified Purchase
This is a very interesting book it is a great pity that the quality of the paper is so poor especially as it is hardback edition . Some photographs in the book are difficult to see due to the poor paper quality.
Read more
2 people found this helpful
Helpful
Report abuse

Londinium1969
5.0 out of 5 stars Fantastic Romp through Mammalian history
Reviewed in the United Kingdom on 31 July 2022
Verified Purchase
This is brilliant and highly recommended. You dont need to be a budding paleantologist to get lost in the ups and downs of our evolution, the strange twists and turns of chance and the impact of geology. It is wonderfully written with a distinct American charm and eye for detail. After you have read this I would advise an immediate trip to NYC and the Natural History Museum. It does mammalian evolution better than anywhere else.
Read more
Helpful
Report abuse

Peter Burridge
5.0 out of 5 stars Looking forward to read this
Reviewed in the United Kingdom on 9 June 2022
Verified Purchase
I got my copy today but am waiting to read it, but what I can say if you have read the rise and full of the dinosaurs and enjoy it my I recommend you buy this book.
Read more
2 people found this helpful
Helpful
Report abuse

Pat Mullen
3.0 out of 5 stars Critters?
Reviewed in the United Kingdom on 24 July 2022
This could have been an interesting read but constant references to "Critters" drove me to distraction. Coupled with imagined scenes of animals peering out or looking about nervously were unnecessary filling.
Read more
Helpful
Report abuse
See all reviews