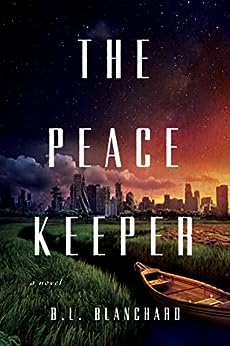 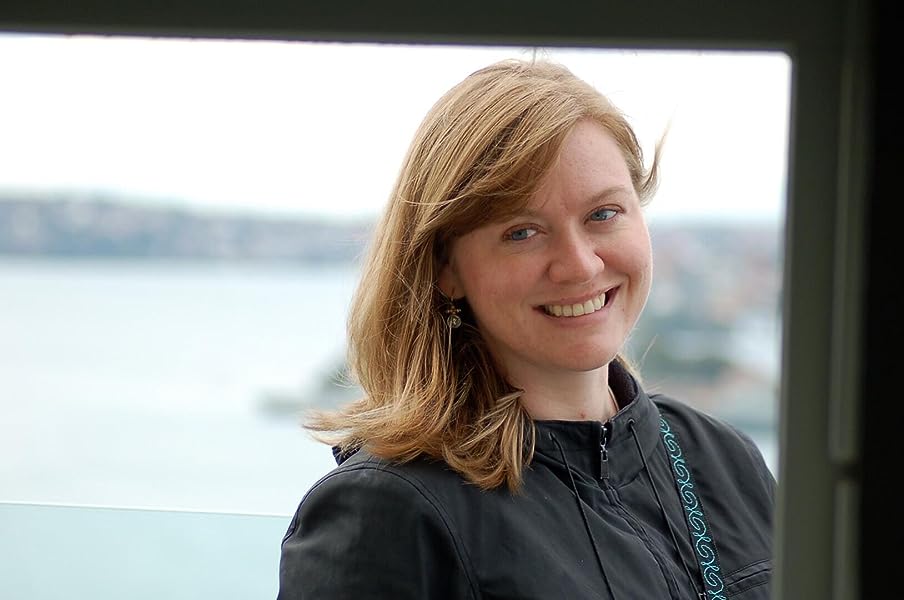 The Peacekeeper: A Novel (The Good Lands) Kindle Edition

by B.L. Blanchard (Author) Format: Kindle Edition
Part of: The Good Lands (2 books)
See all formats and editions
Sorry, there was a problem loading this page. Try again.

Against the backdrop of a never-colonized North America, a broken Ojibwe detective embarks on an emotional and twisting journey toward solving two murders, rediscovering family, and finding himself.

North America was never colonized. The United States and Canada don’t exist. The Great Lakes are surrounded by an independent Ojibwe nation. And in the village of Baawitigong, a Peacekeeper confronts his devastating past.

Twenty years ago to the day, Chibenashi’s mother was murdered and his father confessed. Ever since, caring for his still-traumatized younger sister has been Chibenashi’s privilege and penance. Now, on the same night of the Manoomin harvest, another woman is slain. His mother’s best friend. This leads to a seemingly impossible connection that takes Chibenashi far from the only world he’s ever known.

The major city of Shikaakwa is home to the victim’s cruelly estranged family—and to two people Chibenashi never wanted to see again: his imprisoned father and the lover who broke his heart. As the questions mount, the answers will change his and his sister’s lives forever. Because Chibenashi is about to discover that everything about their lives has been a lie. 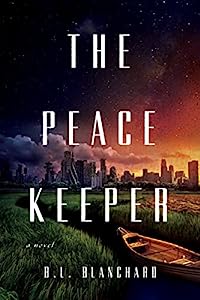 “An excellent example of an imagined alternative North America where restorative justice is at the forefront, and with characters who are well-developed, this is a great debut from an author to watch.” —Shondaland

The Peacekeeper’s inspiring concept drew me in, but the downright unputdownable murder mystery and memorable and complex characters—not to mention shocking twist—are what kept me hooked. This book is what the American imagination needs—to see a story full of Ojibwe (Indigenous peoples of the Great Lakes region) characters in their full humanity and to envision a world in which they rule the land. That’s exactly what B. L. Blanchard offers, and in addition to the inspiring setting, the story will truly grab you.

Set in uncolonized North America, The Peacekeeper alternates between a small town in the Great Lakes region and the big shining city of Shikaakwa (what we know today as Chicago). Chibenashi is a Peacekeeper (police officer), who not only endures the murders of two of his loved ones but is also called on to solve those murders. In his small town, crimes like these just don’t happen. His search for answers takes him on a twisty journey, and along the way he uncovers many family secrets and, ultimately, discovers himself. The truth is heartbreaking and shocking, but there is also hope.

I was pulled into this story’s world, and by the end, I cared for Chibenashi as if I knew him personally. I hope readers will fall in love with this book, as I did.

B. L. Blanchard is a graduate of the UC Davis creative writing honors program and was a writing fellow at Boston University School of Law. She is a lawyer and enrolled member of the Sault Ste. Marie Tribe of Chippewa Indians. She is originally from the Upper Peninsula of Michigan but has lived in California for so long that she can no longer handle cold weather, and resides in San Diego with her husband and two daughters. The Peacekeeper is her debut novel. For more information, visit www.blblanchard.com or follow her on Twitter @blblanchard.

C
3.0 out of 5 stars Dirty deeds in another timeline
Reviewed in the United Kingdom on 6 May 2022
Verified Purchase
The premise - procedural in a world where the Americas were never colonised - is a great one and while I can't say how accurate this alternate world is, it always feels like a real alternate world. Language, social mores, and structures are all different while still being mostly believable. The big problem is the reveal of whodunit is far too lurid and faintly silly for what's otherwise been a more 'everyday' plot where all the suspects had very grounded motives. That drags the book down.
Read more
5 people found this helpful
Helpful
Report abuse

VC
4.0 out of 5 stars Different
Reviewed in the United Kingdom on 5 May 2022
Verified Purchase
This rating is definitely rounded up. A whodunit set in an alternative timeline where Europeans didn't colonise the western hemisphere, this was worth a read even if just for the restorative justice aspect of the storyline.

It was sometimes hard to suspend my disbelief due to the setting being so much like our own world but without things like excessive fossil fuel use, at least in North America. Like everything we've invented exists, and the people in this timeline also managed to colonise Mars. I mean, I think the world would be very different if Europeans never took over the Americas, but I don't think that the near utopia would exist either.

That said, it was interesting to think about, and while the actual plot seemed like a good way to showcase restorative justice (something I've been really intrigued by in recent years), it wasn't what most people would find satisfying or exciting in a crime novel.

I wonder what First Nations people who read this felt about how it was handled.
Read more
2 people found this helpful
Helpful
Report abuse

Martin
5.0 out of 5 stars I read it on Kindle and liked it so much I bought a paperback for my daughter
Reviewed in the United Kingdom on 17 July 2022
Verified Purchase
This is an intriguing piece of alternative world building in which America was never invaded by Europe. The complex civilisation that has developed from the First Nations is imagined in detail: language, architecture, social structures, governance and a criminal justice system based on restorative, rather than punitive and deterrence principles. It is not a Utopia - poverty, social inequality and a caste system based on occupation exist alongside idyllic villages that are visited by European tourists. The story of the murders that drives the narrative structure of the novel winds through wigwams, communal celebrations and Chicago.
I daresay it could be improved by tighter editing, but it is certainly well worth a read.
Read more
One person found this helpful
Helpful
Report abuse

It is at basics a crime novel, and I did not guess where it was going at all.

An unusual setting as the author invented a whole new history of north America to set it in, current day but different.

The only thing that maybe made it difficult until I got my head around it was the place names and even individuals name's but that was just my unfamiliarity with them. Very interesting description of a green nature friendly city.
Read more
One person found this helpful
Helpful
Report abuse

Fettler
4.0 out of 5 stars Well worth your time to read it as it truly is a fascinating novel in the true sense of novel.
Reviewed in the United Kingdom on 19 May 2022
Verified Purchase
What an interesting novel this is, set in a "fantasy" world where America still belongs to the Tribes and tourists are there visiting rather than living.

All of the people who appear have tribal names, as do many of the artefacts and buildings. Add in a society where one the one hand there are tiny villages and on the other hand cities. Think Teepees in the villages and modern buildings in the cities. Think country folk and city folk and add in murder and you have this book - The Peacekeeper.

Whilst I admit to deciding who the killer was very early in the book, it was still a fascinating read as I had to discover how the folk in the book would work it out and also the motives involved.

Overall, well worth your time to read it as it truly is a fascinating novel in the true sense of the word novel.
Read more
Helpful
Report abuse

chimneyman
5.0 out of 5 stars Crime story or a sociological experiment?
Reviewed in the United Kingdom on 21 July 2022
Verified Purchase
I only began to take this novel seriously about a quarter of the way through - up until then, I was thinking that it was a gimmicky attempt to put a conventional crime story into a fantasy setting.

However, I now think that the book is intended to be a serious comment on the ‘fact’ that, whatever social structure the human race might design and try to impose upon itself, human nature itself will never change.

I shall certainly look at the second book in the series whenever it might be released.
Read more
Helpful
Report abuse

Evie
5.0 out of 5 stars Excellent detective novel in alternative universe
Reviewed in the United Kingdom on 11 May 2022
Verified Purchase
This is a most interesting detective novel set in an alternate north continent not colonised by Europeans. It deals with a justice system based on restoration and reconciliation, and cities which are integrated into the environment.
It is however not overly romanticised, and raises the issues of failure.
I am dying to read the next one.
Read more
One person found this helpful
Helpful
Report abuse

Llygodenfawrdur
5.0 out of 5 stars Unique
Reviewed in the United Kingdom on 14 June 2022
Verified Purchase
This is a wonderful unique world presented in a truly human story. The only thing close to it would be maybe the Tony Hillerman books, but they of course are contemporary to their time and place, whilst this envisions a what could have been of huge potential.
There is a lot in here and I am certain I will be unpacking some of it for a while.
I hope B L Blanchard takes us back here and reveals more of this alternate world.
Read more
Helpful
Report abuse
See all reviews
Report an issue
Does this item contain inappropriate content?
Report
Do you believe that this item violates a copyright?
Report
Does this item contain quality or formatting issues?
Report