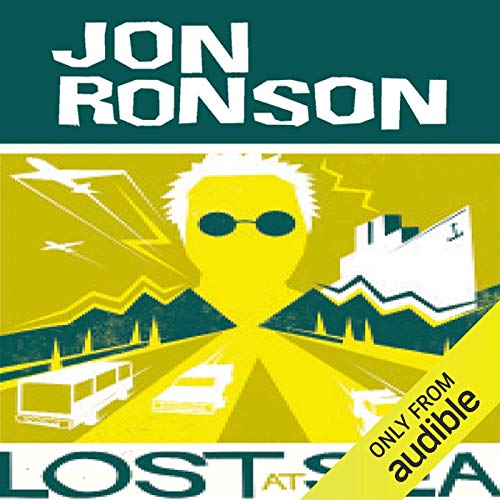 Jon Ronson (Author, Narrator), Audible Studios (Publisher)
4.6 out of 5 stars 466 ratings
See all formats and editions
Sorry, there was a problem loading this page. Try again.

Jon Ronson is fascinated by madness, extraordinary behaviour and the human mind. He has spent his life investigating crazy events, following fascinating people and unearthing unusual stories. Collected here from various sources (including The Guardian and GQ America) are the best of his adventures. Always intrigued by our ability to believe the unbelievable, Jon meets the man preparing to welcome the aliens to Earth, the woman trying to build a fully conscious robotic replica of the love of her life and the Deal or No Deal contestants with a foolproof system to beat the Banker.

Jon realizes that it's possible for our madness to be a force for good when he meets America's real-life superheroes or a force for evil when he meets the Reverend 'Death' George Exoo, who has dubiously assisted in more than a hundred mercy killings. He goes to a UFO convention in the Nevada desert with Robbie Williams, asks Insane Clown Posse (who are possibly America's nastiest rappers) whether it's true they've actually been evangelical Christians all along and rummages through the extensive archives of Stanley Kubrick. Frequently hilarious, sometimes disturbing, always entertaining, these compelling encounters with people on the edge of madness will have you wondering just what we're capable of.

This is an updated edition with new afterword, written and narrated by Jon Ronson.

Read more
©2012 Jon Ronson (P)2012 Audible Ltd
Previous page
Next page
Learn more about membership
List Price: £18.99
You Save: £2.37 (12%)
By completing your purchase, you agree to Audible’s Conditions Of Use and authorise Audible to charge your designated card or any other card on file. Please see our Privacy Notice.
Sold and delivered by Audible, an Amazon company

Blue Dog Girl
3.0 out of 5 stars This is a well written funny book but if you already have bought OUT OF ...
Reviewed in the United Kingdom on 27 March 2018
Verified Purchase
This is a well-written and funny book but if you've already bought OUT OF THE ORDINARY by Jon Ronson and WHAT I DO this is just a collection of the same pieces of writing with a couple of added extra features. I kept on reading it thinking: "Hey, I've seen this chapter before.."

I felt a bit ripped-off after buying it, to be honest. Although the feature on Sylvia Browne is fantastic and this isn't included in the other two books.
Read more
10 people found this helpful
Helpful
Report abuse

A. Marczak
VINE VOICE
4.0 out of 5 stars Theroux minus smarm
Reviewed in the United Kingdom on 6 October 2014
Verified Purchase
A trip through the work of Jon Ronson is like submerging yourself in some of the weirdest cultures in human existence. Real superheroes, UFO conspiracies (with Robbie Williams of all people), born again Christian hardcore rappers, from Jon Ronson you'd expect nothing less.

The interesting viewpoint you get from some of these stories is the openness with which Ronson explains how the subject tries to spin his story, sometimes to the detriment of themselves. There are a couple of stories where no one comes out of it well, and you wonder how much his reputation has gone before him, and how much that has coloured the tone of the article.

Of course, if you are a huge fan of printed (or online) media such as GQ or the Guardian, there's a very big chance you'll have read all of these, but if not, you are in for a treat. Ronson approaches the weird and wonderful with all the style of Louis Theroux, but with none of the smarm.
Read more
7 people found this helpful
Helpful
Report abuse

Mr Ben Fox
3.0 out of 5 stars Good, but the articles are too shot and lack detail. I preferred Louis Theroux's Weird Weekends.
Reviewed in the United Kingdom on 18 August 2015
Verified Purchase
It's a fun read when you've 30 mins spare and want to wind down with some interesting content. However, the articles are just too short! You get in to them then they abruptly end with one of the author's mundane comments about how that person/people/organisation applies to or affects his life and family, and no closure to the actual story at hand. Frustrating!

I'd strongly recommend Louis Theroux's Weird Weekend book instead. It's the same concept, and even has one or two character crossovers, but is a lot more in depth and better written - Ronson's penchant for simple present tense really grates (in my view) and makes it read like the witterings of a madman more often than not.

Don't get me wrong, I am enjoying this, just often left feeling cut short at the end of each and every chapter.
Read more
2 people found this helpful
Helpful
Report abuse

superman
5.0 out of 5 stars The Wonderful World of Jon Ronson
Reviewed in the United Kingdom on 11 May 2015
Verified Purchase
A collection of writings by Jon Ronson,an author I really enjoy. He seems to find special people and special circumstances and tells the story in around 15 pages which makes the book easy to drop in and out of. In this book he looks at the TV show Deal or No Deal, it's contestants and Noel Edmonds. Robbie Williams and his interest in alien beings. The tragedy of people in debt which can lead to suicide ect. Ronson manages to get into people's lifesand extract amazing,weird and interesting "stuff" about them. If you've read him before this is as good as his other books,if you hav'nt this would be a great way to start. Loved the book !
Read more
One person found this helpful
Helpful
Report abuse

Amazon Customer
TOP 500 REVIEWERVINE VOICE
4.0 out of 5 stars Ronson is as Ronson does
Reviewed in the United Kingdom on 23 July 2015
Verified Purchase
An amazon Christmas bargain and as I don't have either of the books it draws on the material was all-new to me.

Jon Ronson is my faux-naif investigative English journo of choice. I was particularly impressed that he even sustained the attitude when he name-checks the main UK-based opposition. Louis who?

If you like extended essays on slightly oddball topics this is just as good as "Them", and given the range of stories and shorter lengths probably slightly better that "The Men Who Stare at Goats".
Read more
One person found this helpful
Helpful
Report abuse

Dave
4.0 out of 5 stars A very enjoyable read
Reviewed in the United Kingdom on 12 April 2017
Verified Purchase
Some extremely interesting stories, Ronsons's style is very engaging and highly enjoyable to read. The only negative point is that the stories seem rather disjointed when compared to the strong themes which connect the stories in 'Them' and 'The Psychopath Test'.

G. Rozzo
5.0 out of 5 stars Greatly entertaining and thought-provoking as usual
Reviewed in the United Kingdom on 31 March 2016
Verified Purchase
I've just started it but as usual Ronson shows, from the very first page, his amazing skill in making everything the most compelling and interesting topic! What can I say...I'd buy any of his books, especially in these Picador beautiful-covered editions ;)
Read more
One person found this helpful
Helpful
Report abuse
See all reviews