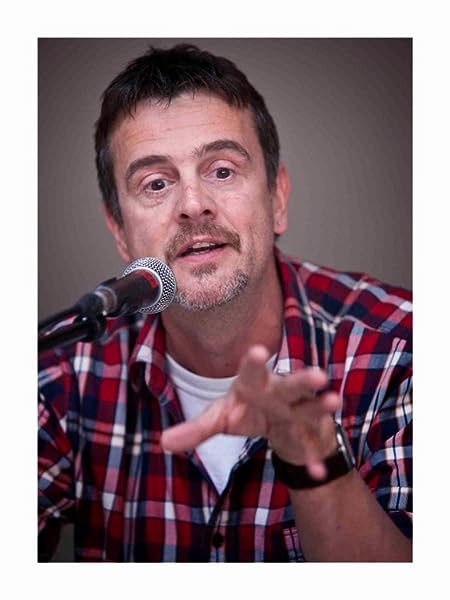 by Mark Billingham (Author)
4.6 out of 5 stars 1,347 ratings
See all formats and editions
Sorry, there was a problem loading this page. Try again.
Note: This item is eligible for FREE Click and Collect without a minimum order subject to availability. Details
Pick up your parcel at a time and place that suits you subject to availability. How to order to an Amazon Pickup Location? Learn more

One of the great series of British crime fiction ― The Times

A new Mark Billingham is always a treat and The Killing Habit hurls the reader straight into the action. Thoroughly enjoyable for being so very real. ― Susie Steiner, author of Missing, Presumed and Persons Unknown

Mark Billingham on superb form. A finely paced and polished procedural, with twists and turns galore and an ending that will chill your soul. ― Cara Hunter, author of Close to Home

As ever with Billingham, a rich cast of characters and tense situations are marshalled with panache, leading to a final terrifying encounter ― Financial Times

The strength of the DI Thorne novels is in the knowledge that all of this could be real. The closing of the novel will please even the most discerning fan of the police procedural, and leave you yearning for more. ― Crime Fiction Lover

Want something to get the heart racing as you laze by the pool?...A thrilling read not for the faint-hearted ― Sun

The gripping masterpiece from multi-award-winning number-one bestseller Mark Billingham sees DI Tom Thorne and DI Nicola Tanner hunting a killer who is yet to kill . . .

Mark Billingham has twice won the Theakston's Old Peculier Award for Crime Novel of the Year, and has also won a Sherlock Award for the Best Detective created by a British writer. Each of the novels featuring Detective Inspector Tom Thorne has been a Sunday Times bestseller. Sleepyhead and Scaredy Cat were made into a hit TV series on Sky 1 starring David Morrissey as Thorne, and a series based on the novels In the Dark and Time of Death was broadcast on BBC1. Mark lives in north London with his wife and two children.
Read more
Start reading The Killing Habit (Tom Thorne Novels Book 15) on your Kindle in under a minute.

Mark Billingham is one of the UK's most acclaimed and popular crime writers. A former actor, television writer and stand-up comedian, his series of novels featuring D.I. Tom Thorne has twice won him the Crime Novel Of The Year Award as well as the Sherlock Award for Best British Detective and been nominated for seven CWA Daggers. His standalone thriller IN THE DARK was chosen as one of the twelve best books of the year by the Times and his debut novel, SLEEPYHEAD was chosen by the Sunday Times as one of the 100 books that had shaped the decade. Each of his novels has been a Sunday Times Top Ten bestseller.

Amazon Customer
5.0 out of 5 stars Great service
Reviewed in the United Kingdom on 11 June 2019
Great book,looking forward to reading it.
Images in this review

Peliroja
4.0 out of 5 stars Four stars
Reviewed in the United Kingdom on 27 June 2018
Verified Purchase
I'm a massive Billingham fan and always shell out for the hardback on publication day. For Thorne fans this is pretty good, typical Tom Thorne. He might still be living south of the river, but takes on a case based around his own stomping ground. Oh, and I'm very pleased to report that Mark has done his homework on the geographies of Amersham and Watford shopping centre, after plonking a roundabout in the middle of the traffic lights at the M25 turn-on at Chorleywood several books ago. (I know, it doesn't matter.....but I loved spotting it!)

This starts well with a very welcome return of the whirling dervish that is Sergeant Christine Treasure and a Hendricks/Thorne game of verbal pub volleyball early in the book. Thorne has been asked to investigate a spate of cat killings and the hilarious one liners are two a penny. Billingham really is the master of this type of dialogue. No contest. I would love Mark to write a play or TV series - I think he's got all the ingredients for a fantastic script.

Brigstocke, Kitson and Jesmond are also back, though no sign of Dave Holland - I'm beginning to think he's been killed off in a previous book and I've blotted it out of my memory. Tanner is taking a lead role in this. I'm still struggling to find much to warm to with her, though she's starting to make more sense to me and her personal story has moved on a fair bit by the end.

This is a whodunnit, which I always like, and two stories are running parallel - that of the cat killer and another about drug related killings. There isn't really (for the most part) the tension of, say, the Nicklin books and there wasn't the usual number of suspects to guess the perpetrator from. Also, I wasn't totally sure I completely 'got' the ending, though I might have been looking too deeply for something that didn't exist.

However, there's no doubt that Mark Billingham is technically one of the best writers out there and, whilst every story isn't going to have the 'wow' factor of Sleepyhead, Bloodline or The Bones Beneath, this is a pretty decent number 15 in the series.

Eric Lee
5.0 out of 5 stars Mark Billingham is England's Ed McBain
Reviewed in the United Kingdom on 6 July 2018
Verified Purchase
It’s not a total mystery why I rate Mark Billingham as the best crime writer in Britain today. He’s created a wonderful lead character, Tom Thorne, with a great supporting cast who you actually grow to care about. His stories, set mostly in north London, are close to home, vivid, real. But it hit me as I read his newest book, what I really love about his work. A book like this one falls into the category of police procedurals, focussing on the nitty gritty of police work but also featuring the home lives of the protagonists. The police procedural is a genre invented by my favourite crime writer of all time, the late Ed McBain. I heard some years ago Ian Rankin described as Scotland’s Ed McBain; surely, Mark Billingham deserves the English title. He is indeed the English Ed McBain. P.S. Some years ago,when I once had the chance for a chat with McBain himself, I mentioned that Rankin had been called the Scottish Ed McBain. He smiled, and putting on a strong Scottish brogue said, “I thought I was the Scottish Ed McBain.”
Read more
7 people found this helpful
Helpful
Report abuse

D. Blewitt
3.0 out of 5 stars Disappointing
Reviewed in the United Kingdom on 30 June 2018
Verified Purchase
I have read all of Mark Billingham novels, and was excited to buy this asap, and saved it for a free day when I could read it in one go. Sadly, I was rather disappointed, more of a jigsaw of a whodunnit than the more tense crime and killer thrillers I prefer, and which he writes so well.
If you haven't read any of the Thorne series, don't start with this one, definitely not one of the best. It is readable but not exhilarating with the only real dramatic tension right at the very end.
I'm dubious about the premise of one of London top Serious Crime cops being put on the case of serial cat killings also, of course, you know it will lead somewhere, but it's a long and winding road to get there.
If I had been reading for an hour or two a day I think I would have struggled to maintain interest.
Read more
7 people found this helpful
Helpful
Report abuse

Mr. D. L. Rees
TOP 1000 REVIEWERVINE VOICE
4.0 out of 5 stars MORE GRAPHIC PORTRAYAL OF LIFE'S SEAMIER SIDE
Reviewed in the United Kingdom on 2 May 2021
Verified Purchase
A serial cat killer, police fearing this a way of the culprit filling in time between human victims. Tom Thorne and Nicola Tanner investigate....

15th in the series, interestingly this a tale inspired by real life events. Mark Billingham had been intrigued by reports of around 450 cat killings, not for a moment believing the eventual police claim of foxes responsible.

Presented here is an alternative scenario, far-fetched no doubt, but containing much to satisfy fans..

As ever, everything depicted is somewhat jaundiced and gritty. Thorne and Tanner have already endured much that will haunt the rest of their lives. More suffering is guaranteed.

Included are fascinating details of how easily drugs (and tiny mobile phones) can be smuggled into jails. Those drugs make certain prisoners so addicted that on release they are only too ready to do the bidding of those who supply. Also there is a cautionary tale (increasingly common in modern novels) about dating agencies - they hunting ground of certain people with evil intent.

Jl Adcock
VINE VOICE
3.0 out of 5 stars Plodding storyline that doesn't quite convince
Reviewed in the United Kingdom on 27 May 2021
Verified Purchase
Mark Billingham has developed the Tom Thorne series cleverly over the years, and he doesn't shy away from tackling important social issues of the day as part of his stories. The Killing Habit, however, feels a bit laboured and it was heavy going until the final few chapters when the plot twist kicked in and it picked up. The whole notion of the plot is based on the hunch that a serial killer is winding down from murders by killing cats, rather than starting with animals and working their way up to people. It's thin stuff to kick the book off, but it grows well enough, although chunks of the book feel like padding with things going nowhere. Running alongside this, Thorne's increasingly difficult relationship with Helen Weeks is clearly building to something major in future stories. It's okay, a workmanlike book - but the follow up "Their Little Secret" is better, and some of the non-Thorne titles reveals Billingham's strengths as a writer better than this one.
Read more
Helpful
Report abuse
See all reviews