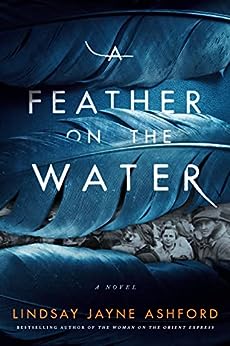 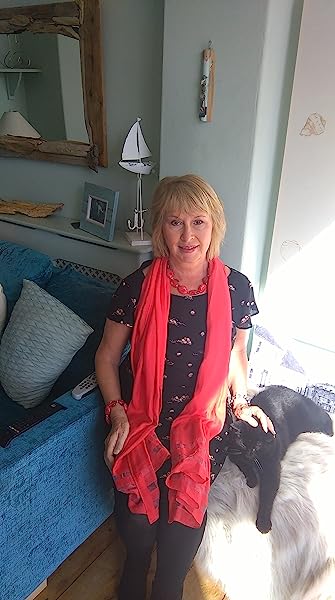 A Feather on the Water: A Novel Kindle Edition

by Lindsay Jayne Ashford (Author) Format: Kindle Edition
See all formats and editions
Sorry, there was a problem loading this page. Try again.

For three women in postwar Germany, 1945 is a time of hope—lost and found—in this powerful novel by the bestselling author of The Woman on the Orient Express.

Just weeks after World War II ends, three women from different corners of the world arrive in Germany to run a Displaced Persons camp. They long to help rebuild shattered lives—including their own…

For Martha, going to Germany provides an opportunity to escape Brooklyn and a violent marriage. Arriving from England is orphaned Kitty. She hopes working at the camp will bring her closer to her parents, last seen before the war began. For Delphine, Paris has been a city of ghosts after her husband and son died in Dachau. Working at the camp is her chance to find meaning again by helping other victims of Hitler’s regime.

Charged with the care of more than two thousand camp residents, Martha, Delphine, and Kitty draw on each other’s strength to endure and to give hope when all seems lost. Among these strangers and survivors, they might find the love and closure they need to heal their hearts and leave their troubled pasts behind.

What is it about World War II stories that draw us in? Each time I read one, I find something unique that entertains, educates, and inspires. In author Lindsay Jayne Ashford’s fresh and beautiful novel, I was moved to tears by the three women helping others overcome the tremendous hardships brought on by war, which feels especially relevant right now.

Martha, Kitty, and Delphine, each from a unique background and corner of the world, are called to serve at a ramshackle Displaced Persons camp in Germany just after the end of the Second World War. They leave behind their problems at home and arrive to find that there are no existing administrators—they will have to manage the camp on their own. Living and working together around the clock, the women grow close, and they are deeply affected by the people around them. Their job is to care for the residents until they can be repatriated, but it soon becomes clear that many are afraid of returning to their homelands. The numbers in the camp swell to more than two thousand, but the occupants have nowhere to go.

Ashford’s novel immerses us in a time and place that doesn’t feel that far away. She infuses the story with the historical details we love and gifts us with the kind of hopeful ending that we long for, both in books and in the real world.

Lindsay Jayne Ashford is the author of The House at Mermaid’s Cove, The Snow Gypsy, Whisper of the Moon Moth, The Color of Secrets, and The Woman on the Orient Express, which blend fiction with real events of the early twentieth century. Lindsay began her career as a novelist with a contemporary crime series featuring forensic psychologist Megan Rhys, followed by the historical mystery The Mysterious Death of Miss Jane Austen. Raised in Wolverhampton in the United Kingdom, Lindsay was the first woman to graduate from Queens’ College, Cambridge, in its 550-year history. She earned a degree in criminology and was a reporter for the BBC before becoming a freelance journalist. She has four children and divides her time between a seaside home on the west coast of Wales and a farmhouse in Spain’s Sierra de Los Filabres. Lindsay enjoys kayaking, bodyboarding, and walking her dogs, Milly and Pablo. Visit the author at http://lindsay-jayne-ashford.com.

Raised in Wolverhampton, UK, Lindsay Jayne Ashford became the first woman to graduate from Queens' College, Cambridge in its 550 year history. She gained a degree in Criminology and was employed as a reporter for the BBC before becoming a freelance journalist, writing for a number of national magazines and newspapers.

Lindsay began her career as a novelist with a contemporary crime series featuring forensic psychologist Megan Rhys. She moved into the historical genre with 'The Mysterious Death of Miss Jane Austen', and her most recent books, 'The Color of Secrets', 'The Woman on the Orient Express', 'Whisper of the Moon Moth' and 'The Snow Gypsy' blend real events with fiction and are set in the first half of the twentieth century.

She has four children and divides her time between a house overlooking the sea on the west coast of Wales and a small farmhouse in Spain's Sierra de Los Filabres. When she is not writing she enjoys kayaking, body-boarding and walking her dogs, Milly and Pablo.

The Cookster @ Reviewer ranking #43
TOP 50 REVIEWERVINE VOICE
2.0 out of 5 stars Nicely written - but too often superficial and lightweight.
Reviewed in the United Kingdom on 3 July 2022
Verified Purchase
Rating: 2.1/5

I was attracted by the premise and setting of "A Feather on the Water". Taking place just after the end of WWII, three women from different countries find themselves running a displaced persons (DP) camp in Germany: Martha has come from the USA and is trying to escape an abusive marriage; Kitty is Jewish and Austrian by birth, but had been sent to England by her parents prior to the outbreak of war in order to escape persecution by the Nazis; Delphine, from France, has tragically lost both her doctor husband and her son to the evils of the Nazi regime.

Given the troubled backgrounds of the three central protagonists and the addition of the harrowing circumstances that have led to thousands of displaced individuals living in the camp, there should have been plenty of opportunity for heart-wrenching poignancy - but it never really delivered on that potential. I really wanted to be drawn into the world and emotions of the three ladies as they faced the challenges of life in their new environment, but the potentially distressing elements of the story were dealt with quite superficially. Instead of delivering a powerful, emotive drama this often felt more like a fairly standard wartime romance.

It has to be said that the novel is nicely written and makes for quite easy reading. However, that really begs the question whether a novel with this setting and dealing with these topics should really be so easy to read? Shouldn't the reader be feeling discomfited and experience some kind of catharsis? Had that been the case, then there would have been a far greater sense of feeling uplifted as you will the protagonists to triumph in the face of adversity. Instead, the resolutions are overly simplistic and clearly aimed at creating a feel-good factor, but it's all just too convenient.
Read more
12 people found this helpful
Helpful
Report abuse

Tambok
TOP 500 REVIEWERVINE VOICE
5.0 out of 5 stars Well-Written. Informative And Entertaining
Reviewed in the United Kingdom on 3 July 2022
Verified Purchase
A Feather On The Wind by LIndsay Jayne Ashford is a well-written novel about 3 women from diverse backgrounds who volunteer to work in a displaced person's camp in post WW2 Germany. What the women, Kitty the young girl from Vienna,via England as a Kindertransport child, Parisian Delphine and Martha from Brooklyn, don't realise is that the 3 of them are expected to run the camp of 2000 residents on their own. They all have their own reasons for volunteering and these form the backbone of the book.

The massive movement of people around Europe after WW2 is an important part of recent history that is rarely addressed in popular fiction and this book does a great job of showing what these camps were and how life was for the residents,in this case mostly Polish people, as they watch events unroll in Poland and have to decide whether to go back or settle further afield.

The book manages to balance the women's stories with the often harrowing experiences of the residents while also giving a broad overview of what these camps were about and the sheer scale of displaced people moving all around the world in the aftermath of the war.

Kez
2.0 out of 5 stars A bit too tame and obvious.
Reviewed in the United Kingdom on 2 August 2022
Verified Purchase
Displacement camps in post World War II Europe were established in Germany, Austria and Italy. These camps were primarily for refugees from Eastern Europe and the German concentration camps. They were set up as temporary facilities. However two years after the war had ended 850,000 people still lived in these camps. The Allies assigned the responsibility for their care to the United Nations Relief and Rehabilitation Administration (UNRRA).

Set in 1945 A Feather on the Water is the story of three women, Martha, Delphine, and Kitty, who volunteer to work for the UNRRA. These three women have left behind troubled pasts, they are carrying emotional baggage and are seeking some sort of redemption. When they arrive at their designated camp they discovery a world they didn’t think existed as they are put in charge of more than two thousand camp residents.

The concept of A Feather on the Water is a good one. The story of these people is harrowing and draws parallels with what is happening today in modern Europe. The potential of the story is immense, providing a hatful of themes and emotions to consider. However Lindsay Jayne Ashford’s novel fails to draw on any of this. As another reviewer has pointed out it’s an easy read - but it shouldn’t be. One of the problems is the three main characters, they just don’t draw enough sympathy or empathy, they are sadly a bit flat. When they do encounter atrocities it just doesn’t pack enough punch. It is on the whole unfocused as the story jumps between the three women. Also everything is too obvious, too easy, all the solutions to their problems fall easily into place. And sadly it eventually dissolves into a Mills & Boon style romance. I am not knocking this, I understand there is a lot of people out there who like this type of literature, it just isn’t my cup of tea. It’s all a bit too tame. It’s disappointing as the story had great potential.
Read more
One person found this helpful
Helpful
Report abuse

Ireland_tribe
5.0 out of 5 stars Engaging and uplifting
Reviewed in the United Kingdom on 2 July 2022
Verified Purchase
Wonderful writing, a heartening perspective on a terribly difficult time as experienced by ‘Displaced Persons’ at the end of WWII, and by women also affected by the war who sought to do something to help. Sensitive and uplifting.
Read more
5 people found this helpful
Helpful
Report abuse
See all reviews
Report an issue
Does this item contain inappropriate content?
Report
Do you believe that this item violates a copyright?
Report
Does this item contain quality or formatting issues?
Report