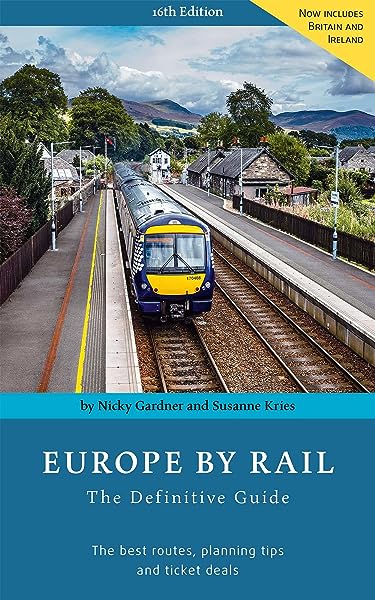 by Nicky Gardner (Author), Susanne Kries (Author)
4.0 out of 5 stars 30 ratings
See all formats and editions
Sorry, there was a problem loading this page. Try again.
Note: This item is eligible for FREE Click and Collect without a minimum order subject to availability. Details
Pick up your parcel at a time and place that suits you subject to availability. How to order to an Amazon Pickup Location? Learn more

Whether you are making a long grand tour or just planning a couple of weekend breaks, Europe by Rail is the perfect guide. The book describes 50 key routes in detail. Together, they span mainland Europe and the British Isles. Each route can be followed in its entirety or used as a building block in a longer itinerary. Beyond the main routes you will find worthwhile excursions well off the beaten track. Written by two highly experienced travellers, Europe by Rail contains useful tips about how to plan your journey, what tickets to buy and where to stop off along the way. There are special sections for holders of rail passes, including Interrail and Eurail, as well as information on night trains. The country guide summarizes key information about travelling by train through each of the four dozen countries listed. Apart from being full of good advice and up-to-date information, Europe by Rail is also a great read. With its nicely opinionated style and lots of cameo accounts of travel history, there's plenty here for armchair travellers too. Now in its 17th edition, Europe by Rail really is the definitive guide on how to get the very best out of Europe’s excellent rail network.
Read more
Previous page
Next page

Nicky Gardner is a Berlin-based travel writer who weaves words about Europe's finest rail journeys. A dedicated slow traveller, Nicky takes time to savour journeys. Susanne has worked with Nicky Gardner on many projects, including many editions of Europe by Rail. The two women edit hidden europe, a print magazine showcasing thoughtful travel writing.
Tell the Publisher!
I’d like to read this book on Kindle

Nicky Gardner is a Berlin-based writer and editor. Since 2005, Nicky has been co-editor of hidden europe magazine (www.hiddeneurope.co.uk). The magazine is a print publication; it features good writing about cultures and communities across Europe.

Nicky is the lead author of Europe by Rail: The Definitive Guide. You can find out more about that book at www.europebyrail.eu. A new 17th edition of this book is published in April 2022. Nicky's co-author is Susanne Kries. Nicky and Susanne share a common interest in slow travel and green mobilities.

The two women were described in E&T Magazine (aka Engineering & Technology Magazine) as "the doyennes of European travel and the subtle connoisseurs of Europe's railways." That same article described Europe by Rail as "a sheer delight, an indispensable book for both real life and armchair travellers and a spectacular achievement, of which the likes of George Bradshaw and Thomas Cook would feel proud."

Nicky's writing has featured in media across Europe. She writes regularly for hidden europe of course, but beyond that you'll find nicely woven words by Nicky in such disparate sources as the Kyiv Post, New Statesman, Russian Life, the Guardian and the Independent newspaper. Nicky's articles on European travel, cultural and politics are regularly translated into other languages. In recent years her work has appeared in Italian, German, Russian, Ukrainan, Polish, Basque and Spanish.

4.0 out of 5 stars
4 out of 5
30 global ratings
How customer reviews and ratings work

R J Clayton
1.0 out of 5 stars Pages 81 - 144 are missing from my copy which is not a good start!
Reviewed in the United Kingdom on 3 May 2022
Verified Purchase
Read more

Major Ravern
1.0 out of 5 stars Missing Pages 500-544
Reviewed in the United Kingdom on 18 July 2022
Verified Purchase
As per a previous reply below I had the same issue but different pages were missing. The last 40 pages were missing and replaced with a repeated chapter/section? Seems to be a flaw with this publisher/printer etc I should add that the part of the book I have read is excellent, and has given me many tips and ideas!
Read more
Helpful
Report abuse

Amazon Customer
1.0 out of 5 stars Missing and duplicated pages
Reviewed in the United Kingdom on 25 July 2022
Verified Purchase
Pages 305 to 336 repeated and pages 337 to 368 missing.
Read more
Helpful
Report abuse

G. EDWARDS
1.0 out of 5 stars These books have been bound with missing sections.
Reviewed in the United Kingdom on 12 August 2022
Verified Purchase
It looks to be an excellent book, however somebody needs to check all the copies to look for binding errors.
Pages 305 to 336 bound in twice, and pages 337 to 368 missing.
This is bad operating of the gathering stations on the binding machine.