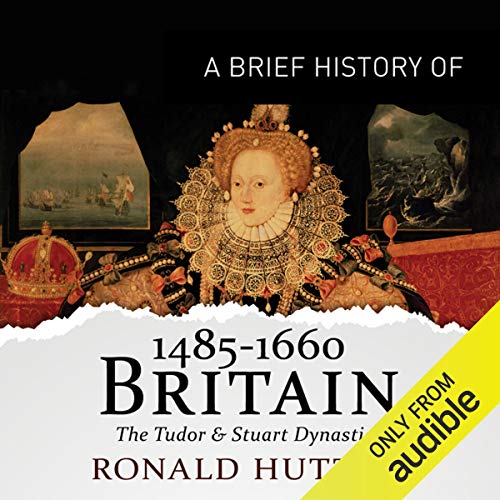 From the death of Richard III on Bosworth Field in 1485 to the execution of Charles I, after the Civil Wars of 1642-48, England was transformed by two Dynasties. Firstly the Tudors, who won the crown on the battlefield and changed both the nature of kingship but also the nation itself. England became a Protestant nation and began to establishment itself as a trading power; facing down impossible odds it defeated its enemies on land and sea. Yet after a century Elizabeth I died with no heir and the crown was passed to the Stuarts, who were keen to remould the kingdom in their own image.

Leading Historian, Ronald Hutton brilliantly recreates the political landscape over this early modern period and shows how the modern nation was forged in these anxious, transformative years. Combining skilful pen portraits of the leading figures, culture, economics and accounts of everyday life, he reveals insights in this key era in our nation's story.

This the second book in the four volume Brief History of Britain which brings together some of the leading historians to tell our nation’s story from the Norman Conquest of 1066 to the present-day. Combining the latest research with accessible and entertaining story telling, it is the ideal introduction for students and general readers.

Read more
©2012 Ronald Hutton (P)2012 Audible Ltd
Previous page
Next page
Learn more about membership
List Price: £27.19
You Save: £3.39 (12%)
By completing your purchase, you agree to Audible’s Conditions Of Use and authorise Audible to charge your designated card or any other card on file. Please see our Privacy Notice.
Sold and delivered by Audible, an Amazon company

Ancient Pistol
5.0 out of 5 stars Excellent Overview
Reviewed in the United Kingdom on 31 December 2012
Verified Purchase
This is an excellent overview of the Tudors and Stuarts (to 1660) by one of the leading historians of the period who is Professor of History at Bristol University. It is not just about the 'Kings and Queens', but covers government, religion and society as well, plus useful comments throughout the text on the relevant historiography. There is also a comprehensive 'further reading' addendum. Highly recommended.
Read more
5 people found this helpful
Helpful
Report abuse

Hannah
5.0 out of 5 stars I'm glad I chose this.
Reviewed in the United Kingdom on 16 October 2015
Verified Purchase
It's useful to have this on Kindle so that I can locate references that I can't be bothered to bookmark when listening to it on Audible. It summarises conflicting historical opinions on various controversies and events and indicates where to find them - very useful, and entertaining too.
Read more
One person found this helpful
Helpful
Report abuse

David A. Stott
5.0 out of 5 stars Need a good grounding on The History of Britain
Reviewed in the United Kingdom on 14 August 2013
Verified Purchase
I am currently working my way through this 2nd volume and it has continued with the same format and excellent delivery of The Brief History of Britain. I can really recommend this series.
Read more
2 people found this helpful
Helpful
Report abuse

Mrs Felicity J Elliott
5.0 out of 5 stars A Brief History of Britain 1485-11660 by Ronald Hutton
Reviewed in the United Kingdom on 12 October 2013
Verified Purchase
I found this book to be an excellent account of the main events of the period, including the historiography of the subject. It gave an insight into evolving developments from political, religious and personal perspectives and was very clearly written.
Read more
3 people found this helpful
Helpful
Report abuse

Katty1
5.0 out of 5 stars Five Stars
Reviewed in the United Kingdom on 31 January 2015
Verified Purchase
A good book to dip into if you want a brief outline of history during a certain period.
Read more
Helpful
Report abuse

Stephen James Bulcock sjb
4.0 out of 5 stars Steve Bulcock revi
Reviewed in the United Kingdom on 17 April 2013
Verified Purchase
A good book.not a full five because it scratches over the surface of nonconformist.The book mentions Quakers on a couple of occasions but as a threat. No mention of George Fox and the incarceration of him and others, excommunications etcetera.
Read more
2 people found this helpful
Helpful
Report abuse
See all reviews