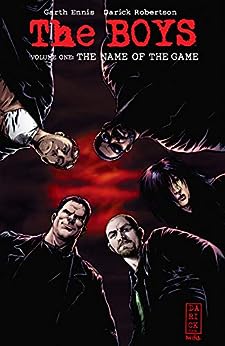 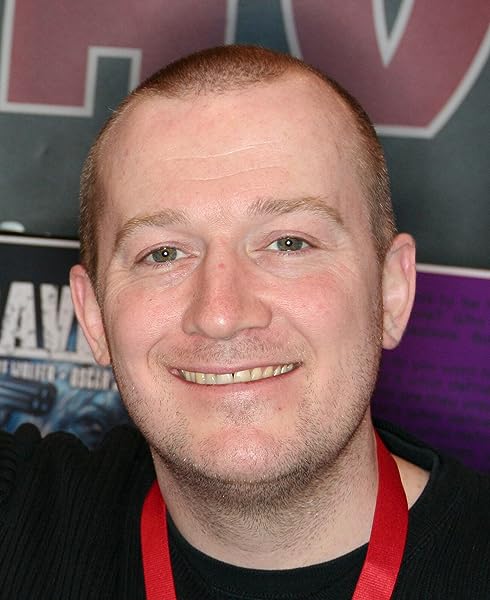 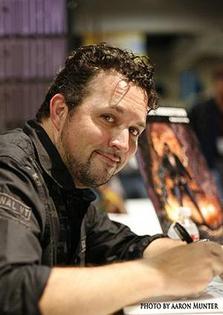 The Boys Vol. 1: The Name of the Game (Garth Ennis' The Boys) Kindle & comiXology

by Garth Ennis (Author), Darick Robertson (Illustrator, Artist), Tony Avina (Artist) & 0 more Format: Kindle Edition
Book 2 of 15: The Boys
#1 Best Seller in Comics & Graphic Novels
See all formats and editions
Sorry, there was a problem loading this page. Try again.
Read the series the Amazon Original show is based on! 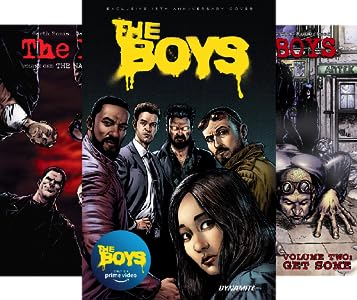 This is going to hurt! In a world where costumed heroes soar through the sky and masked vigilantes prowl the night, someone's got to make sure the 'supes' don't get out of line. And someone will! Billy Butcher, Wee Hughie, Mother's Milk, The Frenchman, and The Female are 'The Boys': A CIA-backed team of very dangerous people, each one dedicated to the struggle against the most dangerous force on Earth - superpower! Some superheores have to be watched. Some have to be controlled. And some of them - sometimes - need to be taken out of the picture. That's when you call in 'The Boys'! Collecting the first volume in the hit series "The Boys" by Garth Ennis and Darick Robertson! --This text refers to an alternate kindle_edition edition.

Garth Ennis is the award-winning writer of Hellblazer, Hitman, Punisher, Preacher, Pride and Joy and War Stories. He is much in demand for his hard-edged, wickedly humorous style. Darick Robertson is the critically acclaimed artist and co-creator of Transmetropolitan. He is also the artist on Fury and Punisher (both with Garth Ennis), and the creator of Space Beaver. --This text refers to an alternate kindle_edition edition.

Amazon Customer
1.0 out of 5 stars Falls apart on the first read????
Reviewed in the United Kingdom on 16 July 2022
Literally falls apart the first time being read.
Images in this review

Davetheliontamer
5.0 out of 5 stars So much more than just a violent adults comic.
Reviewed in the United Kingdom on 26 April 2022
Verified Purchase
I loved the TV show so wanted to check out the comics (graphic novels) as well, and they are so much better than the TV show.
Very violent with lots of swearing including repeated use of the C Word (apparently its a British privilege to use) so be warned, but it is also hilarious, poignant, heart breakingly sad and heart warming. Contoversial and on the pulse of pop culture, it covers gays, lesbians, rape, rascism, hatred, corruption, drug and alcohol abuse and every human emotion we show or hide.
No other artist I have ever seen can capture every human emotion on paper so perfectly as Darrick, it is simply amazing how a slightly blurry background character with an indistinct face can yet express surprise, shoch, humour or terror with such clarity let alone what he achieves with the main characters.
This series of comics makes me laugh like few other things, (Butchers first sight of Hughie after his 1st night with Annie), the violence is genuinely disturbing, (Butchers revenge on Jack) and brings a tear to my eye, (Hughies reaction to 'that video') It also makes me feel quite uncomfortable, (why M.M is caled M.M)
The show has dropped a colossal clanger by not following certain parts of this comic onscreen in my opinion, (the shattering relationship between Homelander and Black Noir) and have lost such an important part in not having The Boys also taking compound V, the difference in dynamic between how The Boys react to The Supes on paper and on TV are poles apart and I will never understand why the TV executives made some of their decisions or even to a certain extent why Garth Enniss went along with the TV show when his story has been castrated, massacred and had its face torn off and put in a pizza box!
The full set of comics in any format, either individually or in omnibus form is not cheap but worth every penny to me.
Its a story you can read a thousand times and the art is always uplifting.
On a personal note, my single favourite individual frame in the entire series is that of Frenchie's 'Bonjour' at the window of the Russians car.
Perfection!
Everyone on Earth has heard of The Boys but if you have only seen it on TV you are missing out on so much.
Buy the comics.

Mr. S. R. Jones
5.0 out of 5 stars A new look at an old genre.
Reviewed in the United Kingdom on 18 October 2013
Verified Purchase
I must admit, I have fallen out of love with comic books recently thanks to the rampant sexism and generally offensive nature that is rife among them.... and one of the things that drew me to this series is that the characters it involves have rather fallen out of love with comic books too.

That's not to say that this comic isn't offensive. I think most things are, to someone, but at least in 'The Boys' the problems that are flagged up in a lot of comics- be they the day-to-day impracticalities of certain super-powers or the impossible egos of the characters themselves- are effectively lampooned and mocked mercilessly. There is a real dark humour to these comics, brought to life through some very dark characters, dealing with some very difficult circumstances. It is also well drawn and distinctive, and provides an interesting new look at the concept of a super-group, as well as pointing out the obvious flaws in the things that we have all held dear in the genre for a very long time.

Overall, these comics and characters will not appeal to everyone. They are not intended for children (or even adults with the general maturity of children), but they are interesting, thought provoking, and genuinely entertaining to boot.
Read more
17 people found this helpful
Helpful
Report abuse

365 Graphic Novels
5.0 out of 5 stars Thumbs Up!
Reviewed in the United Kingdom on 29 June 2013
Verified Purchase
The postmodern genre of superhero bashing is now firmly established but this was one of the titles that helped create it. The premise is that people who acquire superpowers, like people who win the lottery or are elected to positions of power, tend to go off the rails. When society can't tell you what to do any more you lean towards base human weakness. When you have superpowers you are opened up to a whole new realm of excess and depravity - and with Garth Ennis at the helm this gets very depraved indeed. To combat these untouchables a special team is needed and these are the "Boys" of the title.

It has a slow, but shocking, start as we are introduced to the team and what they are up against through the induction of its newest member. There are lots of references to things that have gone before and people who are no longer with us. This builds up our interest as we are drip-fed enough information to keep us guessing. The characters are intriguing and the superheroes are less than heroic, making them easy to deplore. As the storyline progresses the methods the Boys must use get less wholesome and it does make you wonder if the watchers will become as bad as the watched.

The art is superb with great facial expressions as there is a lot of shock and disgust to portray. The depravity mentioned is frequent but not pornographic. It manages to horrify and titillate in equal measure as there are enough visual clues to make your dirty mind run riot.

This is a good start to what promises to be a grand spectacle of a story that is both shockingly entertaining and subtly thought provoking. Thumbs Up!
Read more
7 people found this helpful
Helpful
Report abuse

mark cleary
5.0 out of 5 stars dark twisted take on the superhero genre
Reviewed in the United Kingdom on 14 August 2019
Verified Purchase
Have ypu ever thought the big blue boyscout was dull or batman could be darker after all he's a vigliante. Well this comic is for you in a world where superheros are seen as gods to the masses unacountable for what they do what would you do if you lost everything you held dear and was ignored by the cause enter the boys it's dark twisted and an absolute riot would recamend the series too if you want to see the changes but it's a lot of fun
Read more
2 people found this helpful
Helpful
Report abuse
See all reviews
Report an issue
Does this item contain inappropriate content?
Report
Do you believe that this item violates a copyright?
Report
Does this item contain quality or formatting issues?
Report