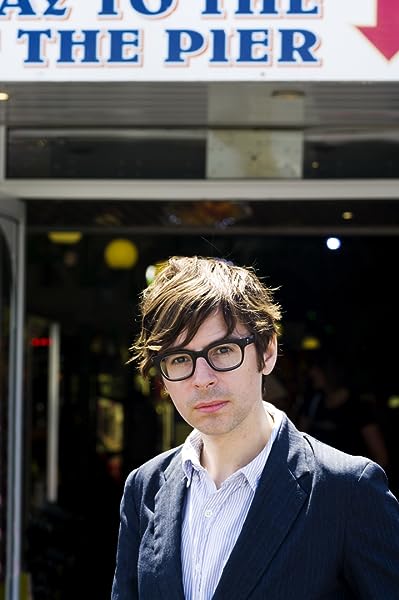 Atlas of Improbable Places: A Journey to the World's Most Unusual Corners (Unexpected Atlases) Paperback – 6 July 2021

by Travis Elborough (Author)
4.3 out of 5 stars 214 ratings
Part of: Unexpected Atlases (4 books)
See all formats and editions
Sorry, there was a problem loading this page. Try again.
Note: This item is eligible for FREE Click and Collect without a minimum order subject to availability. Details
Pick up your parcel at a time and place that suits you subject to availability. How to order to an Amazon Pickup Location? Learn more

'Atlas of Improbable Places has that rare, through-the-wardrobe quality. It is a delightful compendium of the strangest places on the planet.’
DAILY TELEGRAPH

2020 WINNER OF THE EDWARD STANFORD TRAVEL ILLUSTRATED BOOK OF THE YEAR AWARD FOR Atlas of Vanishing Places.

In Atlas of Improbable Places, Travis Elborough goes in search of the obscure and bizarre, the beautiful and arcane. His unique atlas shows you the modern world from surprising new vantage points. Discover the secret Soviet city of Zheleznogorsk and the church tower of San Juan Parangaricutiro, miraculously still standing as the sole survivor of a town sunk by lava. Explore the underground realms of Beijing and Berlin, dug for refuge and espionage, and the floating worlds of remote Palmerston and the macabre Island of Dolls.

The truths and myths behind these hidden lairs, forgotten cities and improbable wonders are as varied as the destinations themselves. These curious places are not just extraordinary sights but reflections on our relationship with the world around us. Acclaimed author and social commentator, Travis Elborough, is a marvellous travel guide to the world's most unusual corners.

‘This engrossing book traverses the heights and depths, the beauty and terror, of our world.’
THE OBSERVER

‘Deeply researched – and really worth your time.’
GQ

Travis Elborough is an author and social commentator. His books include the four titles in the Unexpected Atlases series - Atlas of Improbable Places, Atlas of the Unexpected, Atlas of Vanishing Places and Atlas of Forgotten Places, together with A Traveller's Year, A London Year, The Long-Player Goodbye, Being A Writer and A Walk in the Park: The Life and Times of a People's Institution. Travis is a regular contributor to Radio 4 and the Guardian, and has penned articles on all aspects of travel and culture, from pirates in the Caribbean to donkeys at the British seaside. He has written for the Times, Sunday Times, New Statesman, BBC History Magazine and Kinfolk among others.
Tell the Publisher!
I’d like to read this book on Kindle

Travis Elborough is an author and social commentator, described by The Guardian as ‘one of Britain's finest pop cultural historians’. His books include The Bus We Loved, a history of London’s Routemaster bus; The Long-Player Goodbye, a hymn to vinyl records published as The Vinyl Countdown in the Unites States; Wish You Were Here, a survey of the British beside the seaside and A Walk in the Park, a loving exploration of public parks and green space, hailed as 'a fascinating, informative, revelatory book' by William Boyd.

Atlas of Improbable Places, his collaboration with the cartographer Alan Horsfield, was saluted by Monocle magazine for ‘making the world feel bigger.’

He has also compiled such anthologies as Our History of the 20th Century: As Told in Diaries and Letters to Change the World: From Pankhurst to Orwell.

A regular contributor to international print and broadcast media, he has penned articles on all aspects of travel and culture, from pirates in the Caribbean to donkeys at the British seaside.

JohnH52
2.0 out of 5 stars Better books available
Reviewed in the United Kingdom on 18 October 2018
Verified Purchase
The maps were lacking detail. In fact I found the book quite superficial. It is obvious the writer has not visited many if any of the places in the book but probably compiled it from the internet. The writing style was ok but more on the emotive than factual. Many photos were black and white with poor contrast.
Read more
2 people found this helpful
Helpful
Report abuse

Amazon Customer
5.0 out of 5 stars Five Stars
Reviewed in the United Kingdom on 1 June 2018
Verified Purchase
This book is great and it arrived really quickly and is excellent value for money
Read more
Helpful
Report abuse

KDO
4.0 out of 5 stars Great book...
Reviewed in the United Kingdom on 5 March 2019
Verified Purchase
It was an excellent read!
Read more
Helpful
Report abuse

mwj3724@gmail.com
5.0 out of 5 stars Purpose delivered on the birthday.
Reviewed in the United Kingdom on 26 February 2018
Verified Purchase
This book was for a birthday present for a friend whom is on a wheel chair permanently and doesn't like travel at all as its difficult with his condition, anyway, he enjoyed the book very much and was very happy to read about improbable places.
Read more
One person found this helpful
Helpful
Report abuse

Ladyreading365
4.0 out of 5 stars a brilliant book of brief histories of obscure places
Reviewed in the United Kingdom on 28 August 2021
Atlas of improbable places by Travis Elborough
I was very intrigued when I saw this book and it did not disappoint me. This wonderful book covers places are the world under the sections : dream creators, deserted destinations, architectural oddities, floating worlds, otherworldly places and finishes with subterranean realms. The author provides a picture of areas unknown and a short history of each places from all corners of the globe. No stone unturned. These are pretty amazing places that many people won't of heard of or known existed without this book. They are really interesting. If you like learning about the obscure places in the world or like travelling to the hidden wonders this planet has. This book is for you. I really enjoyed travelling to these places in my imagination. I really wished I could travel in person to see them but this book is the next best thing. Many thanks to the author and publishers for producing this wonderful book to take us on a journey of a lifetime.
Read more
2 people found this helpful
Helpful
Report abuse

sally tarbox
3.0 out of 5 stars Improbable Places
Reviewed in the United Kingdom on 3 March 2020
In which the author discusses 51 weird and intriguing places: there are just a couple of (well written) pages on each, and I had only heard of a few, so definitely of interest.
I have a few reservations, mainly about the layout. Each place features a FULL PAGE colour map- and since few are going to visit most of these sites (some cant BE visited) it seemed a poor use of paper. The photos are all b/w - it would have been vastly better to omit the maps (or just put one big world map with ALL on it) and then do a LOT more photos in colour! (Think Dorling Kindersley!) I wanted to see images of some of the places mentioned and was googling as I read, but one, often small, lacklustre grey image does the narrative no favours!
I also think 2 pages is about the minimum you can get away with.The author only manages ONE (no - half!) on some sites.. though the endless full page map still appears! It all felt a bit of an afterthought- was he trying to quickly bulk it out?
Anyway, accounts of all kinds of weird locations- from reclaimed Dutch land to abandoned industrial cities. Hippy communes, jails and bunkers, a USA version of Stonehenge. Also some natural sites: Turkmenistan's fiery Darvaza crater (the bw photo was most unhelpful- the bits I presume were glowing red could have been snow!); the Venezuelan mountain that inspired the Lost World...
Quite an interesting browse but wouldn't buy a copy (this from library.)
Read more
2 people found this helpful
Helpful
Report abuse
See all reviews